Polo or Chogan, the UNESCO Intangible Cultural Heritage of Persia

Polo or Chogan (or Chovgan) has been the traditional Persian team sport, played on horseback, from two thousand years ago. It was inscribed on the UNESCO Representative List of the Intangible Cultural Heritage of Humanity in 2017. It was known as the sport of kings as it was most popular among the kings and rich people and played in the royal courts. Although during the time, the style of playing has been changed.

In this ancient game, two teams riding on the horses try to pass the small white ball through the opposing team’s goal posts (with 7m length) using a long-handled wooden mallet. It is played by both men and women. Chogan is played while the musicians perform the traditional music and the storytellers narrate the old stories. As a result, it is a combination of athletic, artistic, and cultural elements displaying the history and identity of a nation. It has been safeguarded during the history in different ways.

The theme of Chogan has been used widely in different areas of art and literature. For example, it’s been mentioned in the poems of Ferdowsi (widely known as the preserver of the Persian language and the author of Shahnameh or Book of Kings- that is the longest epic poem in the world), Rudaki (regarded as the first great literary genius of the Modern Persian language), Nezami (in the love story of Khosrow-the Sassanid king- and Shirin- the Armenian princess), Sa’adi, Hafez, and other great Persian poets. It has been also the theme in many valuable Persian miniatures and the designs on the potteries. 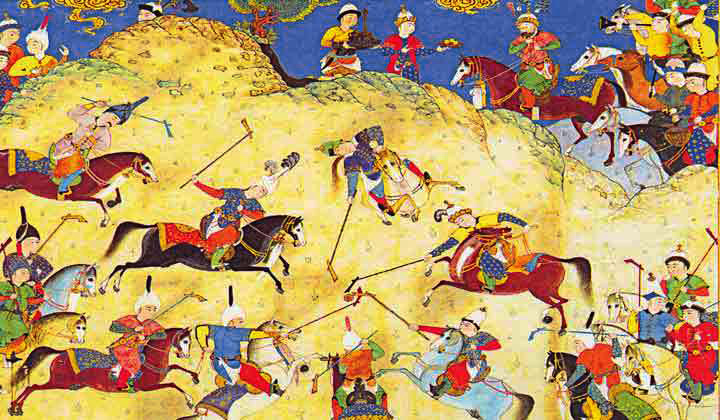 Polo or Chogan in Persian miniature

Chogan was first played in the Achaemenid era (though some claim that it goes back to the Median era) and then found its way to other countries by extension of the Achaemenid borders. But it was the Mongols who promoted Chogan among East Asian countries after invading Iran and getting familiar with Persian culture. However, the first document that mentions Chogan as an Iranian game dates back to the Sassanid era. The game was held between Turkmans and Persians around the year 600 AD and the Turkmens won the game.

Later, in the Safavid era, when Shah Abbas I (1571-1629) chose Isfahan as his capital city and ordered Naqsh-e Jahan Square to be built, Chogan was played in the square. The two original stone goal posts are still available in the square used as the standard to the present time. The king watched the game from the terrace of Ali Qapu palace. In fact, the Safavid era was the time this ancient Persian game fully flourished.

Chogan became popular in England in 1860 after the British officers and soldiers brought it to their country from India. Then it spread to other European countries, the USA and the Latin American countries. Chogan was included in the Olympic Games for the first time in 1900 held in Paris. Today, it is played by the elephants instead of horses in some countries across the world. Golf and Hockey are the two sports inspired by the Iranian traditional sport of Chogan that is called Polo in other countries. 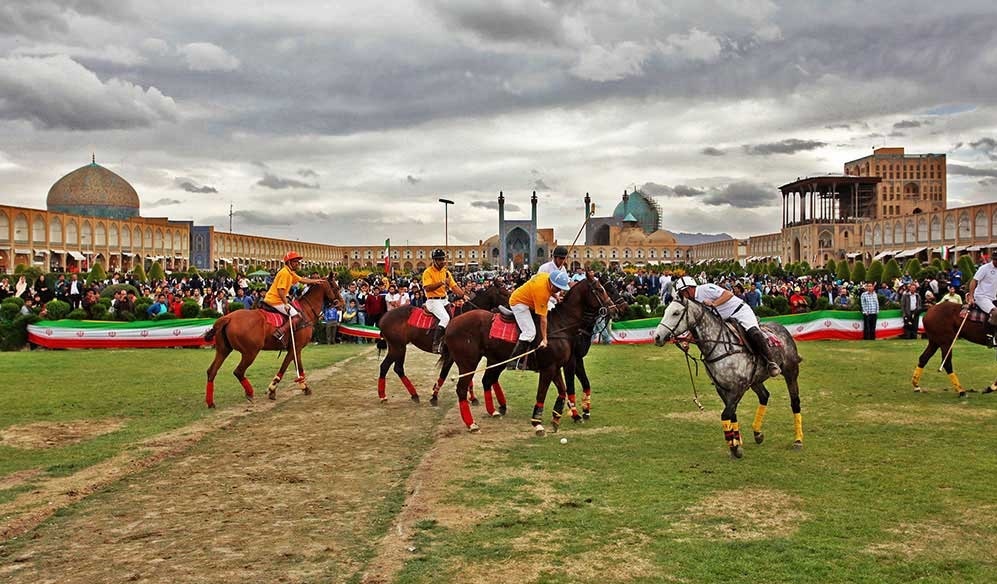 Polo or Chogan in Naqsh-e Jahan Square in Isfahan, Iran

Chogn is not just a game! It’s a strategic game that requires physical readiness and skill for both riders and horses, just like a miniature battle. In the past, it was a play where the Persian riders exhibited their skills in riding, fighting, and playing as well as the fighting skills, speed, and agility of their horses. The horses of Chogan are called polo ponies. Since horse riding was a military practice in the past, Persians believed the horse that can do well in Chogan, can do well in the war too.

Both the riders and the Chogan horses must have safety equipment. The players try to pass and control over the ball with long-handled wooden mallets during the game. The mallets are about 130cm long attached to another cylindrical wooden piece (about 25cm) perpendicular to each other. The ball is a bit larger than a tennis ball about 140g. The grass field is 274m long and 145m wide (the size of approximately six soccer fields). 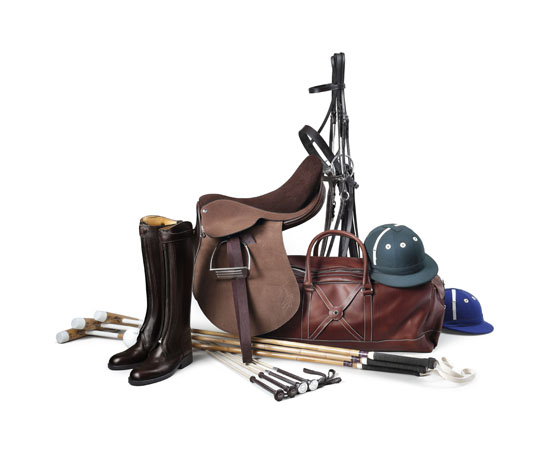 Four players play at each team: one forward, another forward who plays harder as the both forward and the defender roles, one who is the crucial position and usually the highest rated player of the team who should change the defensive role to the attacking role and create opportunities for the team, and one goalkeeper whose primary responsibility is to protect the goal area. The aim at this game is to score goals against the opposing team.  As Chogan is a fast game, the players have to be always ready to change their roles promptly and momentarily.

The game is divided into the two half-times including six periods of 7 minutes. Each period is called chukka. At the end of the game, if there is no winner, the extra time is given by the referee. The team who scores a goal first will win the game. The time for resting between every two periods is 3 minutes and between the two half-times is 5 minutes. Because the game requires a lot of physical activities, the tired horses are replaced by fresh ones between the chukkas. 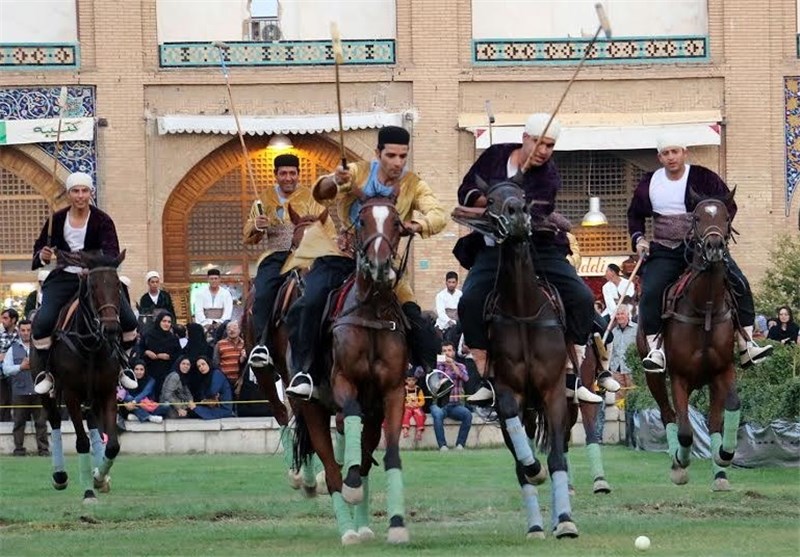 To start the game, the riders of the two teams stay in a row behind the line in the middle of the field and the umpire throws the ball in. Two umpires and one referee preside over the game. The umpires ride on the horses. The referee sits at the sidelines and will arbitrate whenever the umpires cannot reach an agreement on a foul. The players try to reach the ball to score goals against the opposing team.

When a player rides toward the ball and the ball is on his or her right side, he or she has right of way. In this case, no one is allowed to prevent the player from striking the ball unless in a defined standard distance. The game is paused whenever there is a foul. Blocking the way of a rider and putting his or her health in danger, and hitting the ball from the left side are two cases of the fouls. After each goal, the grounds are changed and the referee places the ball at the center of the ground. The players can take a rest between two chukkas. 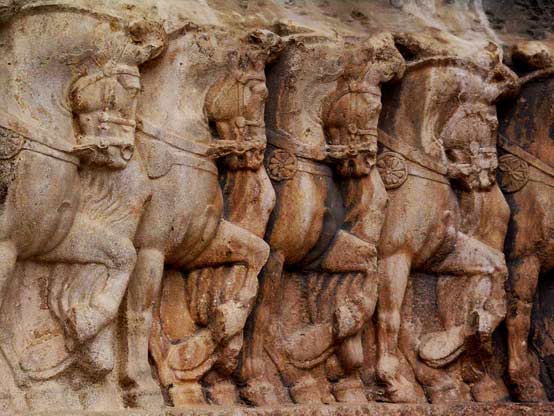 The Sassanid bas-reliefs in Tang-e Chogan gorge, near the ancient city of Bishapur, Fars province

Chogan has been traditionally safeguarded by the families and the locals in Iran. Today, the Polo (Chogan) Federation of Iran is the authority to promote this traditional sport in the country: Different Chogan associations hold training courses to preserve this traditional intangible cultural heritage namely: 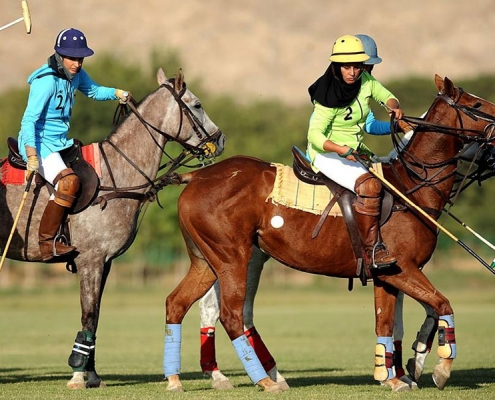 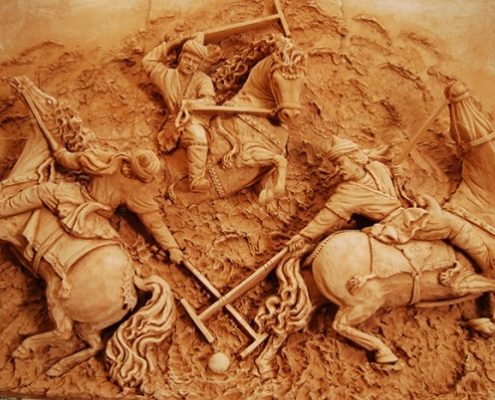 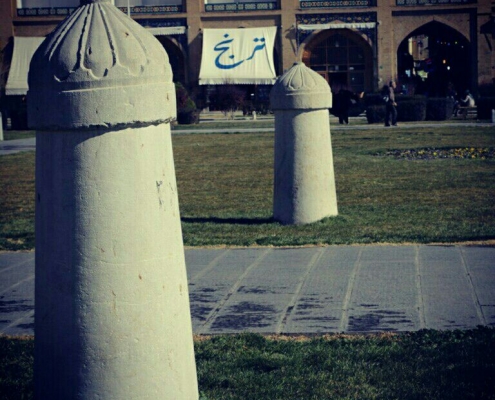 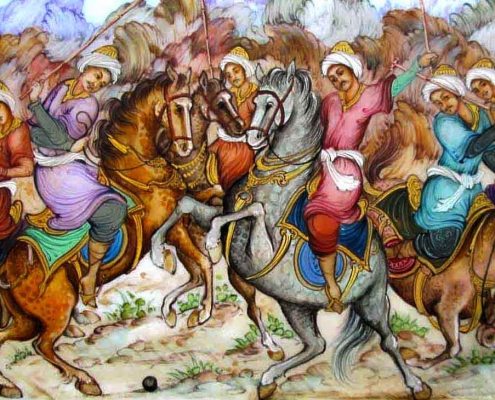 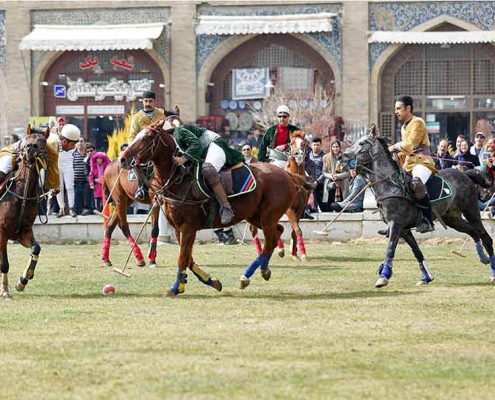 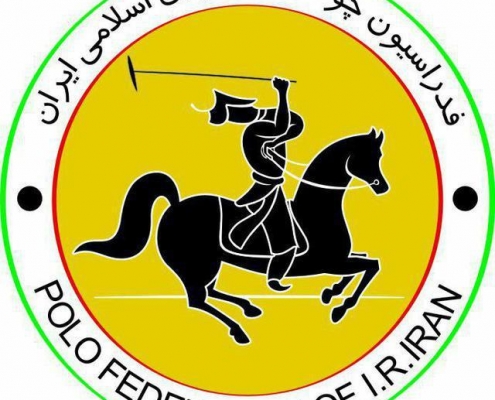 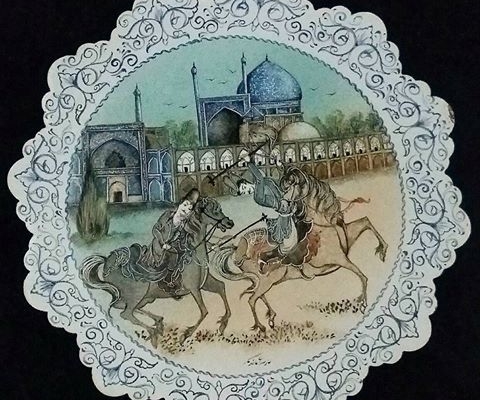 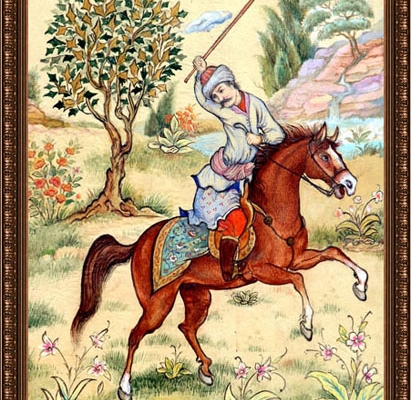 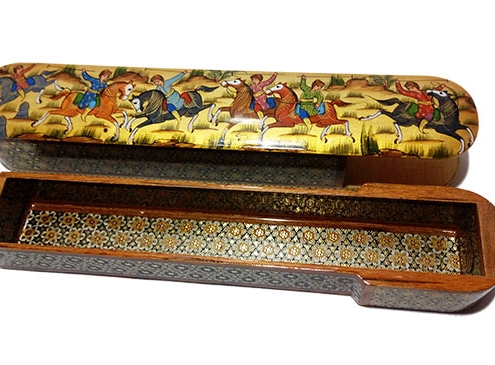