Festivals, rituals, events, and traditions are among the variety of interesting factors that make distinction. Distinction is a critical factor that motivates tourists to visit different countries of the world. Iran, as a historical country has variety of ancient traditions still held by Iranian people. To get familiar with Iranian culture, its most famous festivals and ceremonies are introduced and explained.

Nowruz known as the Persian New Year is one of the greatest Iranian festivals celebrated worldwide by Iranians and some other ethno-linguistic groups as the beginning of the New Year. It is a traditional festival having roots in thousand years ago even before the development of the Persian Empire in 5th BC. Persian New Year begins at the end of freezing days of winter when the fresh mild days of spring are celebrated for 13 days usually beginning on 21st of March that is the first day of spring in the Iranian calendar. Since Nowruz begins at the exact moment of the vernal equinox, the moment of celebrating the New Year differs from one year to another. The true moment of Nowruz is calculated according to Jalali calendar.

Though Nowruz is deeply rooted in Zoroastrian creed, it goes beyond religious, cultural, and national boundaries and it is celebrated as a traditional festival by all Iranians and many others living in other countries such as Uzbekistan, Azerbaijan, Afghanistan, and Kyrgyzstan. It is also inscribed on UNESCO list of Intangible Cultural Heritage of humanity in 2010. Consequently, March 21 was recognized by the UN General Assembly as the International Day of Nowruz.

At the beginning of Nowruz, a fictional character in Persian folklore comes to the streets. He is called Haji Firuz whose face is covered in soot and wears a red hat and bright red clothes. He plays tambourine, sings, dances, and takes money from people who are happy with his happy singing. 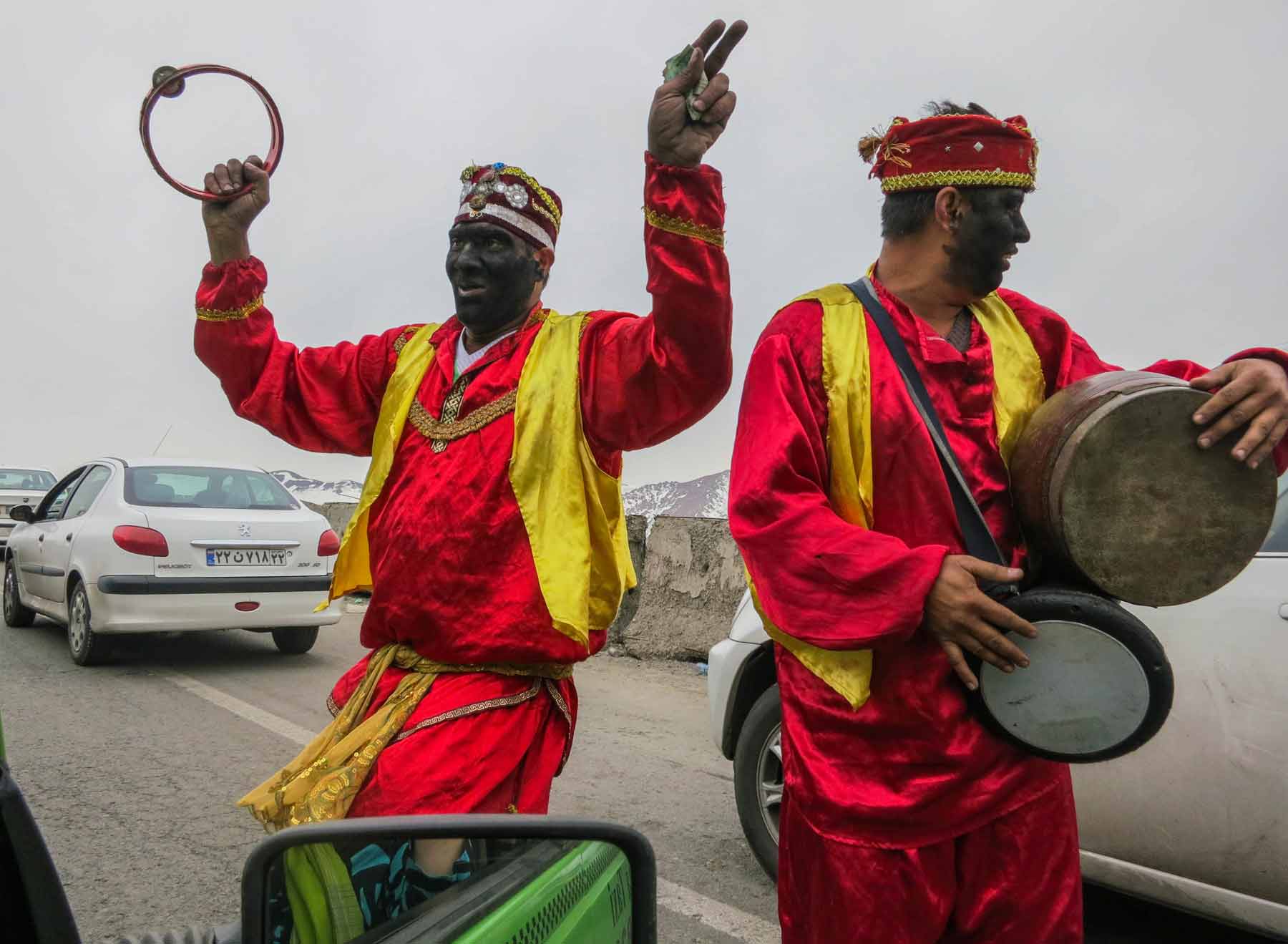 Setting “Sofreh Haft Seen” is an interesting custom of Nowruz. Sofreh or tabletop includes Seven (Haft) symbolic edible herbs and fruits all starting with the “Seen” letter in Persian Alphabet (pronounces as S letter in English), an ornamented mirror, Holy book, and a Divan of Hafez. Each of the fruits or herbs stands for a meaningful concept. For instance, Seeb( Apple) stands for health, Sumac stands for warmth of life, or Sabzeh (sprouted wheat grass) stands for a sign of life renewal. During 13 days of Eid Nowruz (New Year festival), relatives and friends meet each other to say “ Eid Mubarak”, celebrate the new year together, eat delicious sweets dedicated to Nowruz, and wish each other a fortunate and prosperous year. Moreover, the elderly usually give Eidi(gifts or goodwill money) to their children, grandchildren, or the relatives’ kids. The last day of Nowruz (the 13th day) is called Sizdahbedar. It is also known as the day of nature. On the last day of Nowruz, Iranian families spend time picnicking outdoors by gathering in parks, gardens, and other green places. According to a traditional belief, it is inauspicious to stay home on the 13th day of Nowruz; however, it is an opportunity to spend time happily on the last day of Nowruz Holiday and also to get enough energy for the new working days. 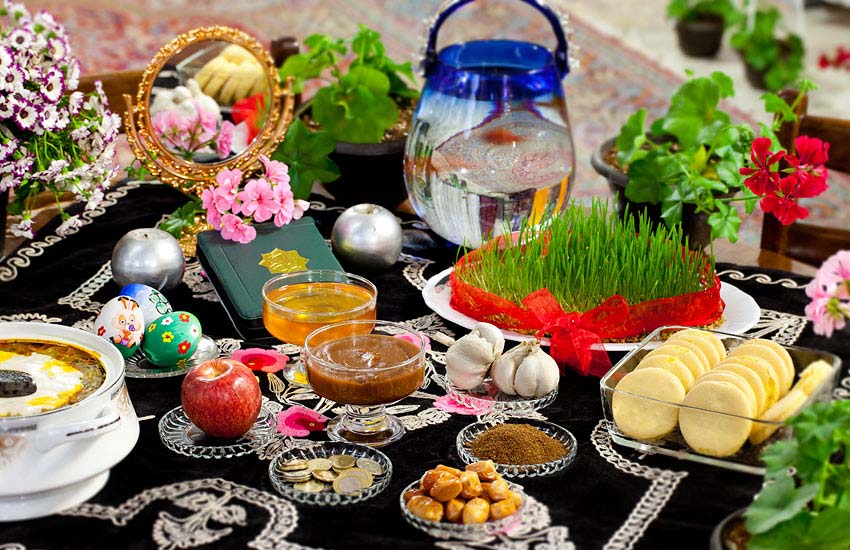 The autumn starts with the month of Mehr (the seventh month of the year) in Persia and its 16th day called “Mehregan” is the celebration of light, friendship, kindness, and love in Avestan calendar. Mehr is the symbol of the sun in Persian culture and the sun is said to be the eye of Mitra, the goddess of light. It is also the Thanksgiving Day for the Iranian farmers. In ancient times, Mehregan was harvest day and some of the crops were sent to the king as a gift. On this day, people go to visit their loved ones specially the ones that have been missed for a longtime to enjoy the beauty of this vibrant-colored season together. The ceremony begins with saying a prayer in front of a mirror. Hugs and kisses are exchanged after a handful of noghl (sugar plum) are thrown over each other’s heads. Mehregan is marked by love, light, friendship, and kindness. 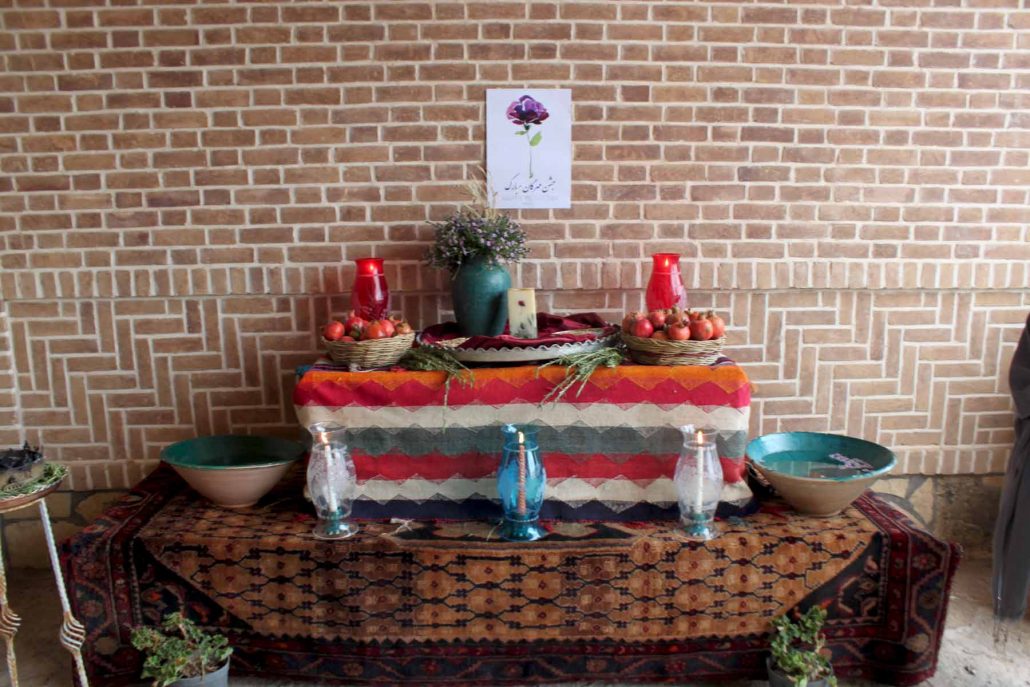 Shab-e-Yalda (Yalda Night) also known as Shab-e Chelleh is one of the most ancient Persian festivals annually celebrated on December 21 by Iranians all around the world. It is the last night of autumn and the longest night of the year. Yalda means birth and it refers to the birth of Mitra; the mythological goddess of light. Since days get longer and nights get shorter in winter, Iranians celebrate the last night of autumn as the renewal of the sun and the victory of light over darkness.  On Shab-e-Yalda, people gather in groups of friends or relatives and usually at the home of grandparents or the elderly to pass the longest night of the year happily by eating nuts and fruits, reading Hafiz poems, making good wishes, and talking and laughing all together. Eating is the delicious part of Yalda Night. Iranians eat nuts, watermelons, and pomegranates on this special night. Some believe that watermelon symbolizes the sun by its spherical shape while others believe that eating watermelon keeps one safe from being hurt by winter diseases and coldness. Pomegranate is also a symbol of birth and its bright red seeds symbolize the glow of life.  Reading poems from Divan-e-Hafiz is another interesting tradition of Yalda Night. Each of the members of a family or a group of friends makes a wish and randomly opens the book; then the eldest member of the family or friends reads the randomly selected poem loudly. Since the poem is believed to be the interpretation of the wish and the way it would come true, it is fun to interpret the poem and guess the wishes others make. In this way, the last and longest night of autumn passes happily and the first great day of winter begins. 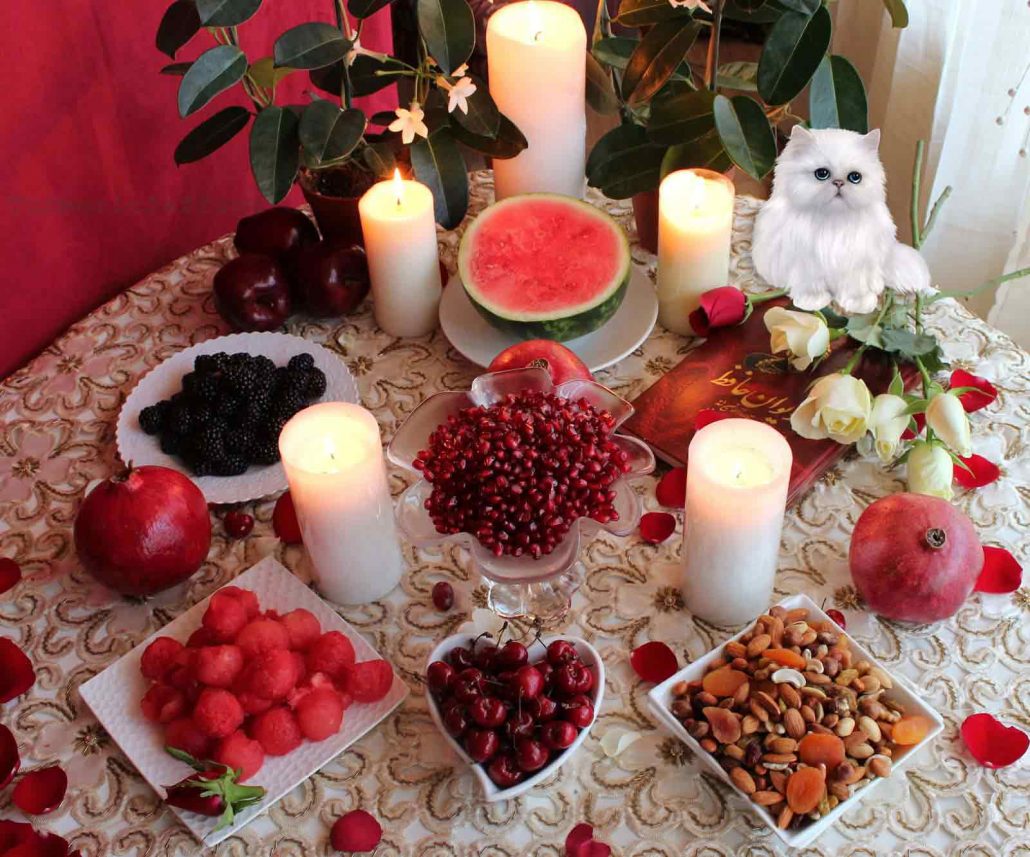 Tasua and Ashura are respectively the 9th and 10th days of Muharram (the  first  month  of  the Islamic calendar) and Shia Muslims commemorate the battle of Karbala that occurred in 680 AD and the Muslims’ Prophet’s grandson” Hossein” and his 72 relatives and supporters were killed. Tasua and Ashura are somehow symbols of standing up for justice. Tasua and Ashura ceremonies are an example of cultural-religious ceremonies among Shia-Muslims. They are held annually in the form of mass movement in Iran. Though Tasua and Ashura are religious ceremonies for Iranians, they fascinate many tourists by representing different traditions varying from one city to the other one. In fact, Tasua and Ashura ceremonies reflect the culture   and   religion   of   Shia   Muslims of Iran. People usually dress in black and rally in the street. Some hold huge metal pieces decorated with flags and lead the population, some beat their drums, some hit their backs with chains, and others accompany the mourning ones.

Many families cook food that is called “Nazri”. Nazri is distributed among all people whether rich or poor and the lucky tourists can participate in making food or distributing it and finally eating the delicious Nazri food.

In Tehran, Imam Mosque in the grand bazaar is one of the best places to observe the event; however, it is really crowded. In Yazd, Nakhl-Gardani is one of the great cultural-religious traditions. The Nakhl (meaning palm-tree) is a huge structure weighing several tons in the shape of a very large leaf or the cypress tree. Hundreds of male mourners in Amir Chakhmaq Square carry the Nakhl which symbolizes the coffin of Imam Hossein and his martyr companions on their shoulders. The city of Taft close to Yazd boasts the largest Nakhl of Yazd province. Lorestan’s people also hold ceremonies such as performing tragic music with Chamari (a traditional musical instrument) during the first decade of Muharram. 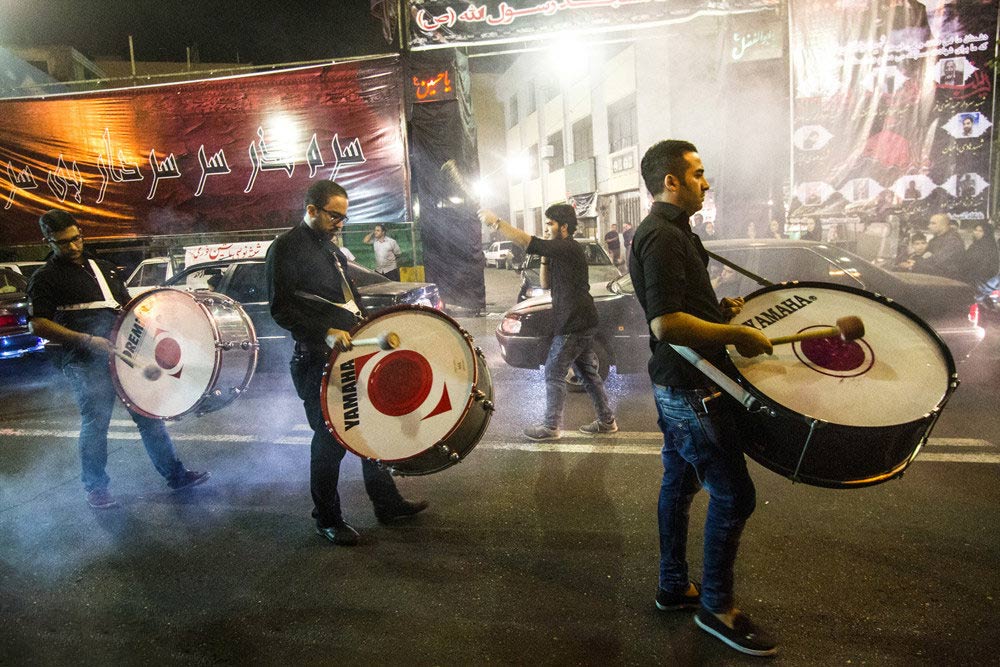 Chaharshanbeh Suri known as the Persian Festival of Fire is also an Iranian festival celebrated on the eve of the last Wednesday before Nowruz . The origin of the festival dates back to the early Zoroastrian era and it is celebrated with firework displays and the jumping over fires. People believe that the red color of fire symbolizes health. In the evening of Chaharshanbeh Suri, people make bonfires and jump over the fire while symbolically ask the fire to take sickness away and bring about health. 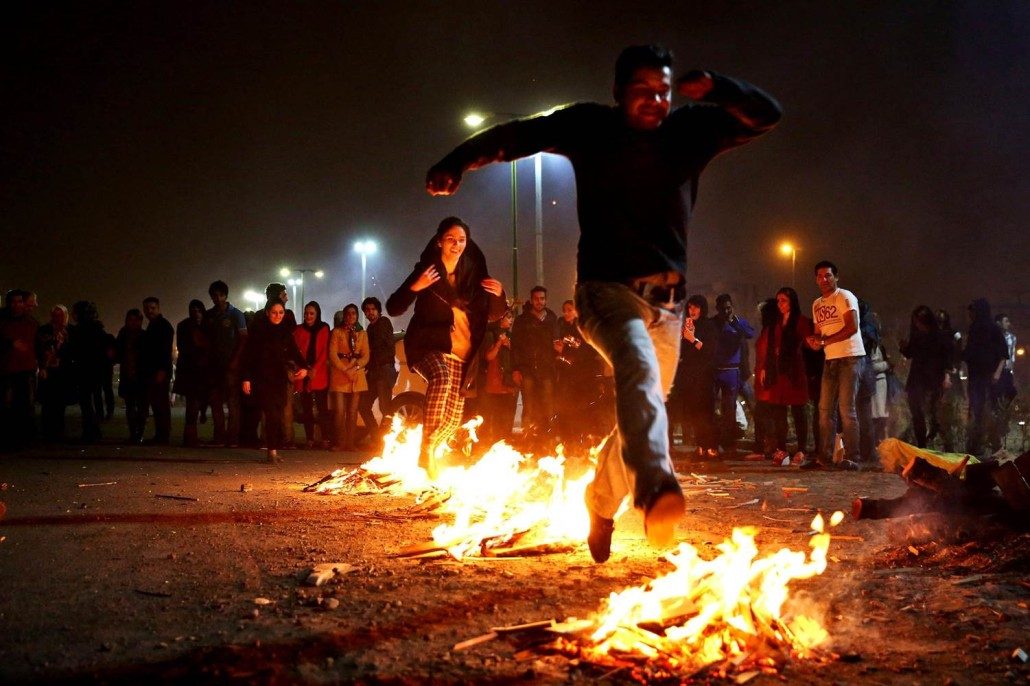