Known as one of the oldest settlements of the world, there are so many cultural and historical sites in Kermanshah that you can delve into and be able to touch this rich culture and civilization. The pleasant weather, eye-catching landscapes, marvelous sites, delicious souvenirs, and hospitable people are some reasons why you must visit Kermanshah.
Kermanshah is the capital of Kermanshah Province located in the west of Iran at the foot of Zagros Mountain Ranges. There are so many astounding attractions in Kermanshah for tourists. Not only are there beautiful sites in the city, but also you can find staggering landscapes and historical attractions outside of Kermanshah. In 2006, Bisotun Inscription in Kermanshah was registered as a World Heritage Site of UNESCO. Besides, Taq-e Boustan, Temple of Anahita, Moaveon-ol Molk Tekieh, Dokan-e Davood Rock Temple, Parau Cave, and Niloofar Lagoon are some of the must-see attractions of Kermanshah.

This is the capital hub for trade in Kermanshah and has an age of more than 150 years. This covered bazaar has different stuff that you might find interesting. Do not miss out on visiting the local lifestyle of people in the bazaar.
You can find the bazaar on Modarres Street close to Azadi Square.

Dating back to 1945, the staggering Shafeii Mosque has been built liken the Turkish mosques. You will undoubtedly like the tall minarets of the mosque. Note that this mosque is built for Sunni Muslims and not Shia.
Close to the junction of Motahari Boulevards and Javaدrshir Boulevard, you can see this mosque.

Being built in the Qajar Dynasty, the mosque possesses a portal, courtyard, and a Shabestan. It is a beautiful mosque in Feizabad County and has been recently renovated. Right on the Javanshir Square, you can see the Dolatshah Mosque.

Emad-ol Dowleh Mosque is another beautiful architectural site that dates back to the Qajar era as well.

In Persian rituals, Tekieh is a place where Shia Muslims commemorate Imam Hossein’s death (the third Shia Imams). Ornate mirror tiles in the dome room, decorated hall, and inscriptions belonging to King Mozaffar are some of the features of Biglar Beygi Takieh. This is also another architectural masterpiece in Kermanshah that goes back to the Qajar Dynasty. In Feizabad County, on Modares Street, you can go to the Biglar Beig Tekieh.

If you are so into the monuments belonging to the Qajar period, you must visit the Tekyeh of Moavenol Molk. Religious leaders’ funerals and religious ceremonies were used to be held in this monument. Admittedly, it used to function as a center for solving ethnic conflicts. This Takieh has been built 100 years ago and contains carved illustrations on tiles depicting the battles of Muslim prophets and Imams. On Shariati Street close to Vaziri Square, you can visit this Takieh. 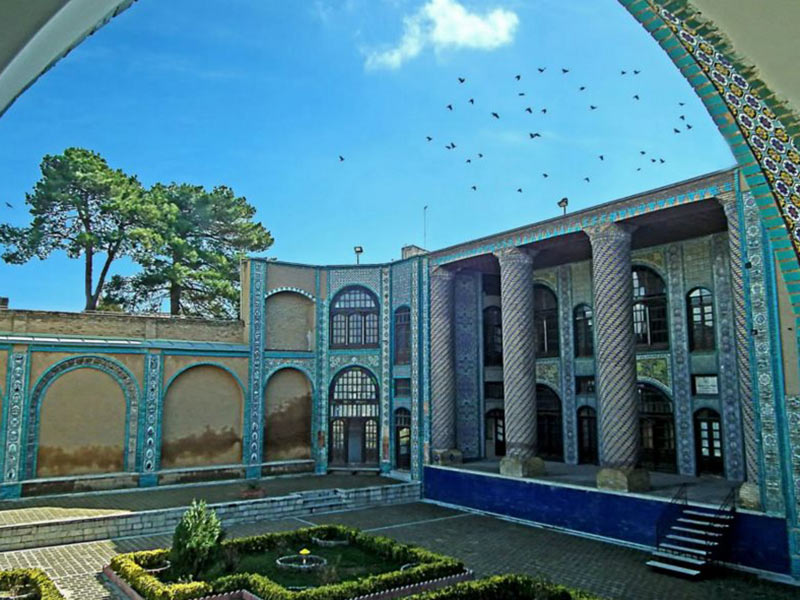 This Takieh has been built 100 years ago and contains carved illustrations on tiles depicting the battles of Muslim prophets and Imams.

This museum has started its work since 1990 including thirty halls showing various significant agricultural and anthropological items. Musical instruments, equipment for writing, gears of hunting, and traditional customs are some of the items exhibited in the Kermanshah Museum of Anthropology. A few meters away from Vaziri Square, on Shariati Street, you will find the museum.

During the Qajar Era, this eye-catching monument was possessed by a Jewish merchant. If you want to get acquainted with ancient Persian houses’ architecture, this house is a well- rounded representative. You can find this house in Faizabad County as well.

Magnificent Attractions Outside of Kermanshah
While visiting Kermanshah, do not miss out on the wonderful attractions outside of the city since they carry a marvelous history and architecture behind their facade. Besides, if you are more of a nature lover, here are some amazing places which you should not miss.

Meaning the “Arch of the Garden”, it is located in the northeast of Kermanshah within five kilometers to Kermanshah. Taq-e Bostan holds a great treasure of Sassanid Empire rock reliefs. These relics depict the ceremonies of kings Ardeshir II, Shapour II, Shapour III, and Khosrow II. This is the cornerstone of Kermanshah tourist attractions. Bear in mind that this complex has a National Park which you can enjoy resting for a while. 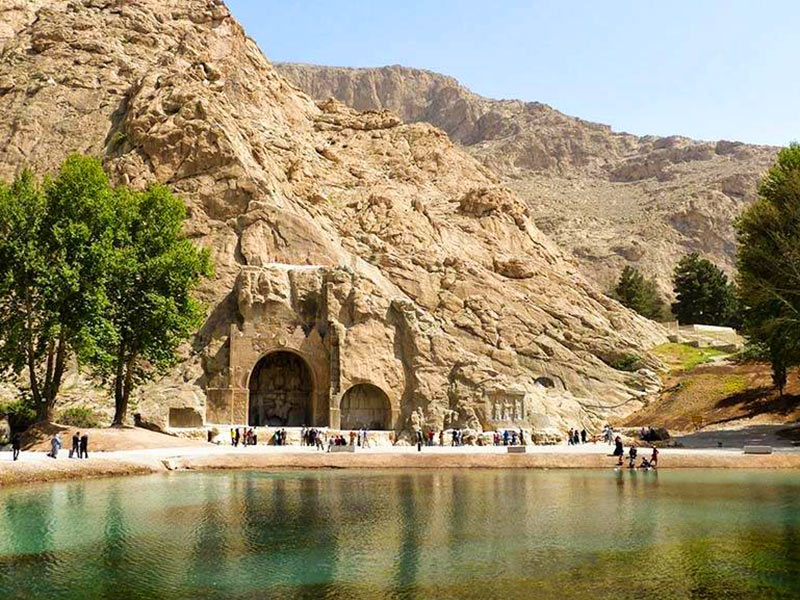 Taq-e Bostan holds a great treasure of Sassanid Empire rock reliefs which is considered as the cornerstone of Kermanshah tourist attractions.

Another remarkable site in Kermanshah Province is the Bisotun complex which has been registered in the UNESCO Wolrd Heritage Site’s List. The complex includes monuments, rock reliefs, caravansaries, and bridges. Bear in mind that it holds one of the most famous yet tragic Persian love stories. The story of Farhad and Shirin belongs to this place. Farhad – a well-known artist and craftsman- was famous for carving rock and fell in love with Shirin -Armenia Queen-. Khosro -the King of Iran- assigned him an impossible task to carve a tunnel through Mount Bisotun -the current Bisotun Inscription- in order to dissuade him from his love. Farhad succeeds in his job but again got deceived by the King Khosrow that told him that Shirin has passed away, so he committed suicide.
Additionally, in Mount Behistun, you will find the Shekarchian Cave which dates back to the Paleolithic Era. This inscription has been written in three languages namely Elamite, Babylonian, and ancient Persian. Bisotun inscription has an autobiography of Darius the Great. You can see Farvahar symbol, last vestiges of Sassanid Palaces, Ilkhanid and Safavid Carvansaries, and Temury clay ovens in this complex. 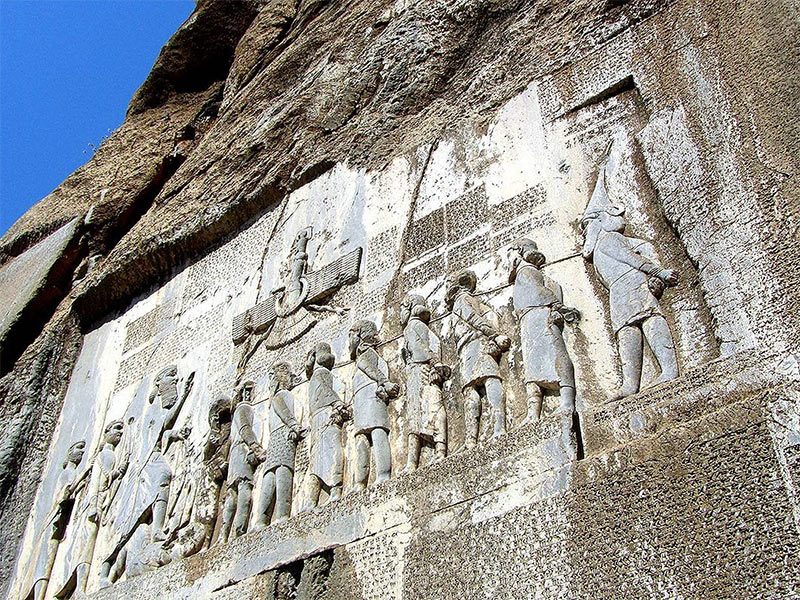 Within a 100- kilometer distance to Kermanshah, you can reach the temple in Kangavar. Anahita was a Persian goddess of fertility, water, health, healing, and wisdom. Anahita Temple has an area of about 2.5 hectares and was built during the Sassanid Period. That is why you can see various Sasanid symbols and words engraved all over the place. If you are into Parthian Style, note that the temple has this style as well.

If you wonder what a catacomb is, well it is an area dug into the mountains to bury a dead person. This masterpiece goes back to the Achaemenids Era and is located right across the Pol-e Zahab City.

Salt deposits and rocky mountains are magnificent remarks of this site which makes it to be an exceptional attraction. It is located on Shahou Mountain within a 90- kilometer distance to Kermanshah. It is said that Quri Qale Cave is 65 million years old. Nature has formed so many astounding halls in the cave. 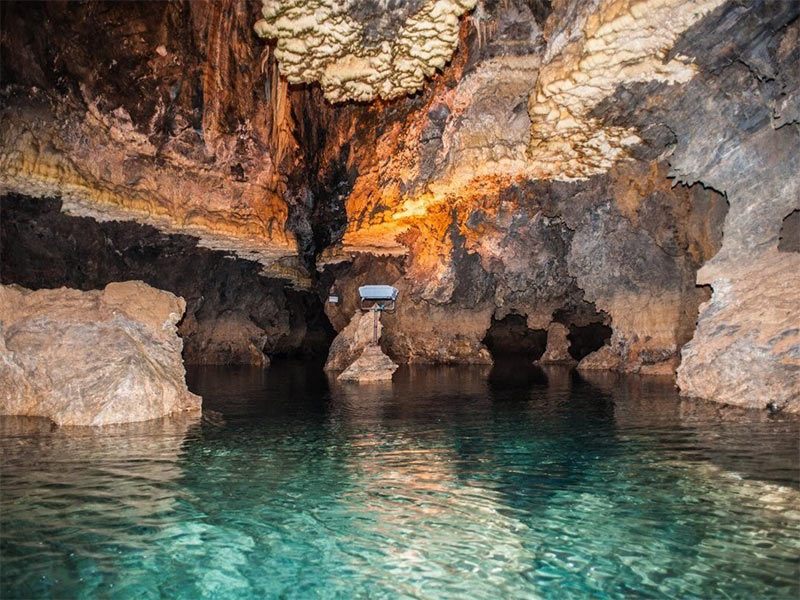 Ghoori Ghaleh Cave: Nature has formed so many astounding halls in this 65 million-year-old cave.

Known as one of the world’s most famous caves, which is both vertical and large. It is located in Mount Parau.
If you like visiting caves, you might take a tour in Do- Ashkaft Cave.

This is a wetland only in a 25-kilometer away from the city. This is an untouched natural site which you would enjoy visiting.

In the northwest of Kermanshah, in a 36-kilometer distance, you can see this wetland. The Hashilan Wetland possesses an area of 450 hectares. The number of small islands in the area reaches to more than 100. Each island has an area from 100 square meters to one hectare. 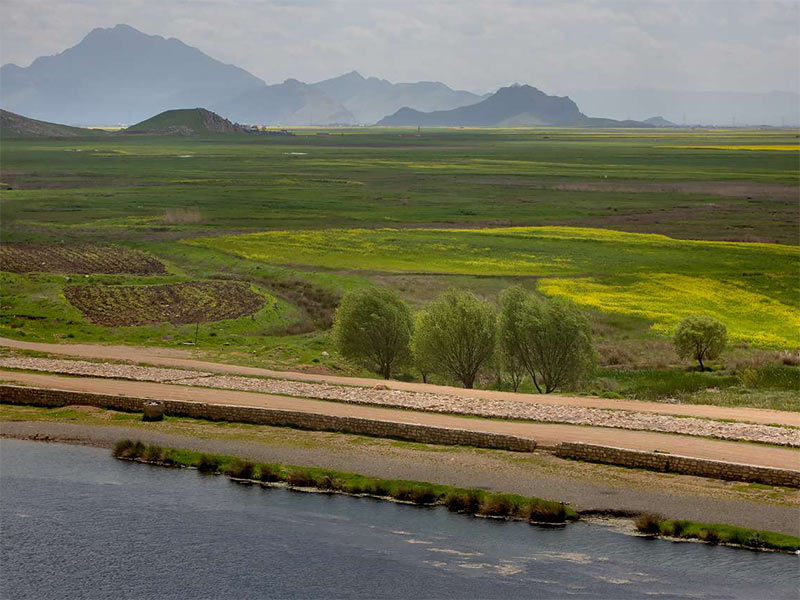 The garden has about 4000 different species and demonstrates different plants belonging to Japan, France, and Italy.

We hope you found this article helpful. If you have any experience visiting Kermanshah or have any questions, feel free to leave a comment below. We would be glad to help.