The North West of Iran

Iran, covering a huge area and embracing one of the oldest civilizations of the world, offers many cultural heritage sites and natural attractions to the tourists who travel to Iran. Moreover, the vastness has led to a great diversity in climatic conditions. As a result, Iran is a kind of destination that provides numerous attractions and activities to the tours who visit Iran all year round. For example, the travelers and tourists who travel to Iran in the summer can enjoy summer activities in the coolest places in the country. No matter how hot is the weather, they can have a memorable experience of their cool summer holiday.

Ardabil, the City of Spas

Ardabil, located in the north-west of Iran, with breathtaking natural landscapes, cultural attractions, historical structures, and hot spas is one of the most beautiful and verdure places in the first half part of the year. Ardabil enjoys great potentials for culture, nature, sport, food, rural, and health tourism. It welcomes many tourists and visitors every year during hot summer holidays. One of the most scenic routes of Iran that is Asalem to Khalkhal road originates from Asalem in Gilan province and finds its way to Khalkhal in the south of Ardabil province. It provides mesmerizing scenery for everyone who wants to enjoy leisurely driving, photo taking, climbing, hiking, and biking while breathing the fresh air.

The mausoleum (khaneghah) of the ancestor of Safavid dynasty- Sheikh Safi al-Din Ardabili- is located in Ardabil too. This magnificent complex of mosaics and tile works, muqarnas, calligraphy, and stucco is the UNESCO World Heritage Site. One of its sections includes Chini Khaneh (porcelain hall) with the brilliant decorations and artworks, a must-see that one should not miss. The complex was constructed 4 centuries ago. Another archeological site is Qale Khosrow (Khosrow Castle). It includes a graveyard and two castles going back to 1700-1450 BC.  Ardabil embraces many waterfalls, spas, and mineral waters- with medicinal qualities- such as Sarein (Sareyn). Sarein is one of the top tourist attractions of Iran. 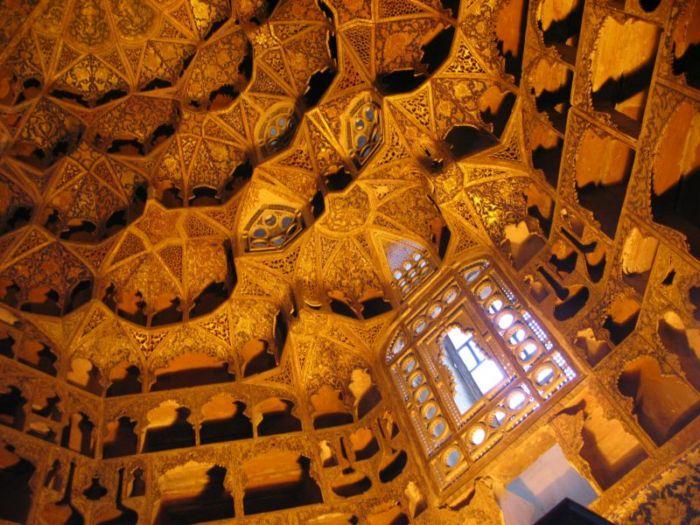 Sabalan crater lake at the top of Sabalan mountain- a dormant volcano and the third highest mountain in Iran with 4811 m height, Shorabil Lake  (the habitat for migratory birds with its healing minerals and picturesque landscape), Neor Lake (the greatest sweet-water lake of Ardabil province and the habitat of rainbow trout), Alvares ski resort (a good base for trekking in the summer), Fandoqlu Forest as the largest hazelnut hub of Iran (Fandoq means hazelnut) covered with one of the rare plant species Sousan-e Chelcheraq or Lilium ledebourii and its grass skiing resort, Virgin Mary church, Meshkin Shahr suspension bridge- the highest in the Middle East, Pir Taqi suspension bridge, the Safavid Haft Cheshmeh (seven springs) or Dash Kasan bridge, Vind Kalkhoran ancient stone village, Pate Khor wetland (the habitat of many species of wildlife, especially migratory birds), Safavid old bazaar, and Jame Mosque are just some of the many tourist attractions in Ardabil. Jame Mosque of Ardabil, the formerly Seljuk four-ivan, was built on the remains of a Sassanid fireplace.

There are some museums for the tourists who wish to become more familiar with the rich ancient culture of Iran such as Natural History, Anthropology, Handicrafts, Archeology, and Stone museums in Ardabil. Traditional and nomadic handicrafts and edibles, and natural products are among souvenirs of Ardabil. Ardabil carpets and rugs are among the best of Persian carpets that are exported to other countries. Ash-e Doogh (yogurt soup), honey, and Halva Siah (black halva) are of the best products of the region. 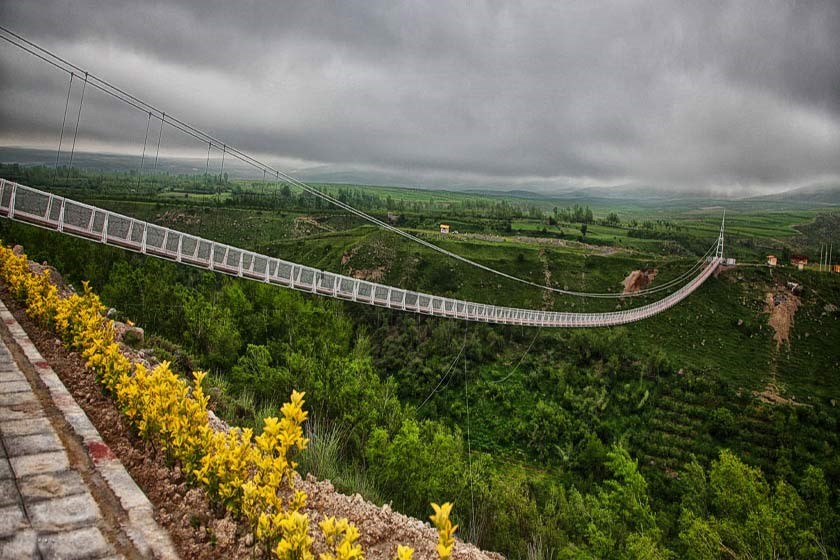 Tabriz, the Tourism Capital of Islamic Countries in 2018

Tabriz, named as the tourism capital of Islamic countries in 2018 by OIC (organization of Islamic cooperation), is the capital of East Azerbaijan province and the largest city in the northwest of Iran.  Once you visit this Azari city, called the city of the firsts -because of having the first fire station, the first printing office, the first municipality, etc. in Iran- and embracing magnificent rich cultural heritage and spectacular natural landscapes, its chilling vibe would flow into your veins.

Tabriz old labyrinthine bazaar, an important trading spot along the Silk Road in the past, is the UNESCO World Heritage Site that sells everything but the chicken sink from jewelry and handicrafts to household goods. It is also the largest roofed bazaar in the world. The carpet section is worth visiting as Persian handmade carpets and rugs are globally well-known. Jame Mosque of Tabriz next to the bazaar is well-known for its two minarets, Seljuk remarkable brickworks, Ilkhanid stucco works, and the splendid mosaic works on its entrance. 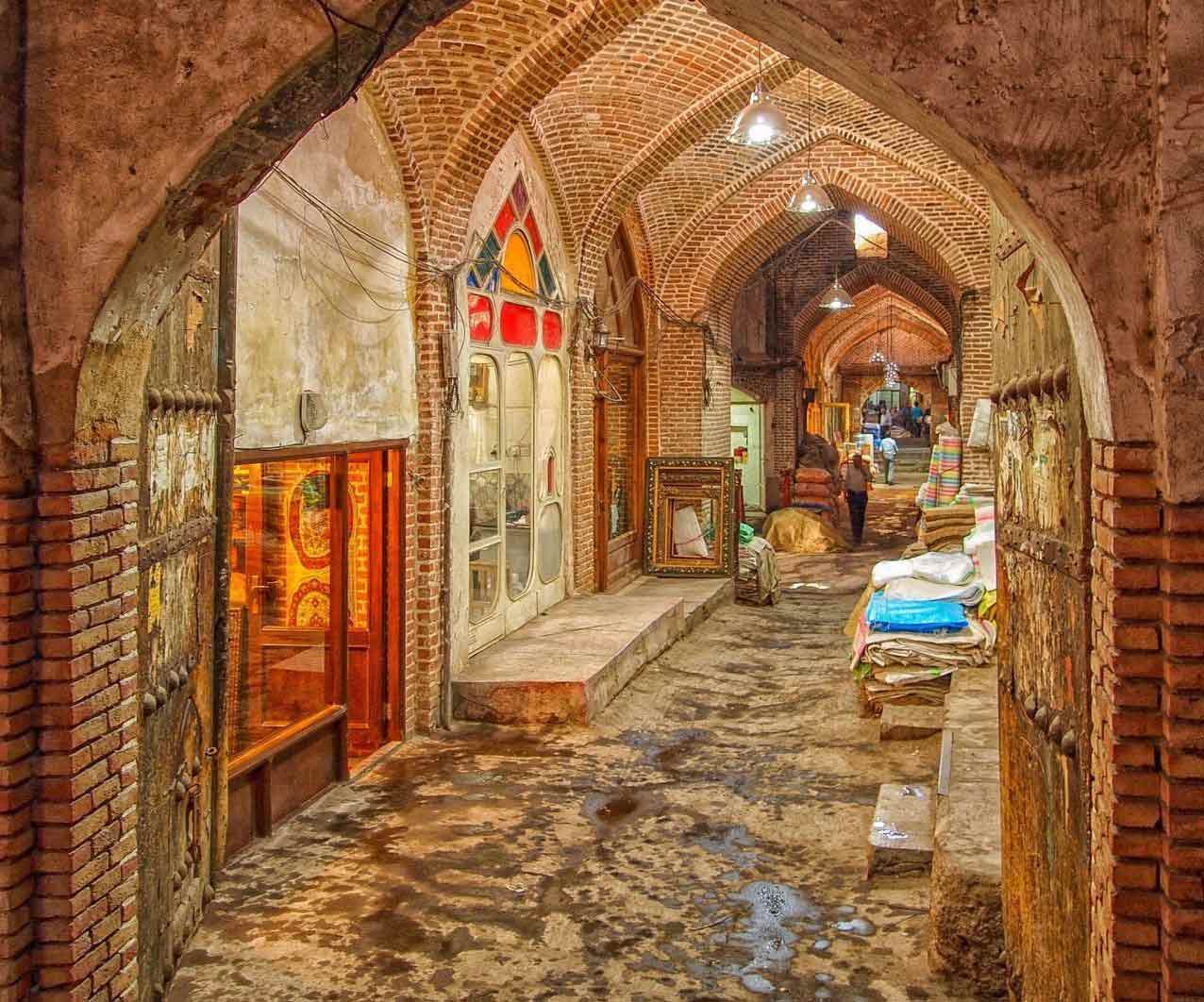 Tabriz old bazaar, the largest roofed bazaar in the world and the UNESCO World Heritage Site

The Blue (Kabud) Mosque is another attraction dating back to the 15th century. The name of the mosque derived from the elaborate blue tile works used to decorate the walls and the ceiling of the mosque. Azerbaijan Museum, near the Blue Mosque, exhibits the artifacts the oldest of which dates back to the Iron Age. The remnant of Arg-e Tabriz or Arg-e Ali Shah (Tabriz citadel) on Imam Khomeini Street going back to 14th century is another attraction that is visited by all tourists and the passers-by. 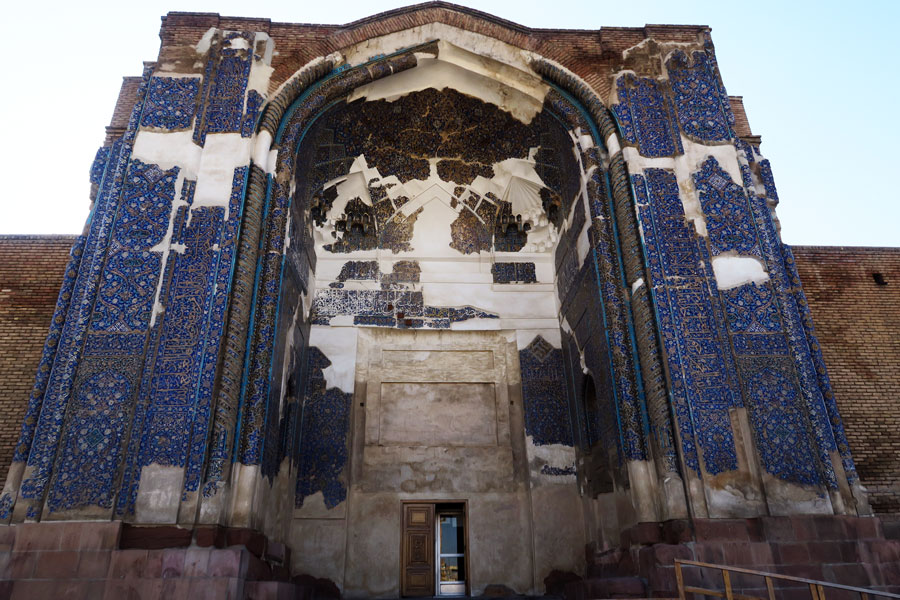 There are some churches in Tabriz such as St. Mary church dating back to the 12th century, but St. Stephanos Monastery– UNESCO World Heritage Site- is the most visit-worthy. This 9-century Armenian monastery is located in Jolfa and just about three hours and a half ride from Tabriz.

House of Constitution or Mashrootheh Museum (the place where the leaders of the constitutional revolution gathered together early 20th century), the Mausoleum of Poets (housing the graves of more than 400 prominent poets), Elgoli or Shahgoli Park (a beautiful park surrounding a lake with a traditional restaurant-pavilion at the center), and Municipal Hall in Sa’at Square (with a museum in its basement) are among tourist attractions that are worth visiting while traveling to this part of Iran. The Eynali mountain range on the north of Tabriz gives the climbers an amazing view of the city. Tele cabin (cable car) is also available. 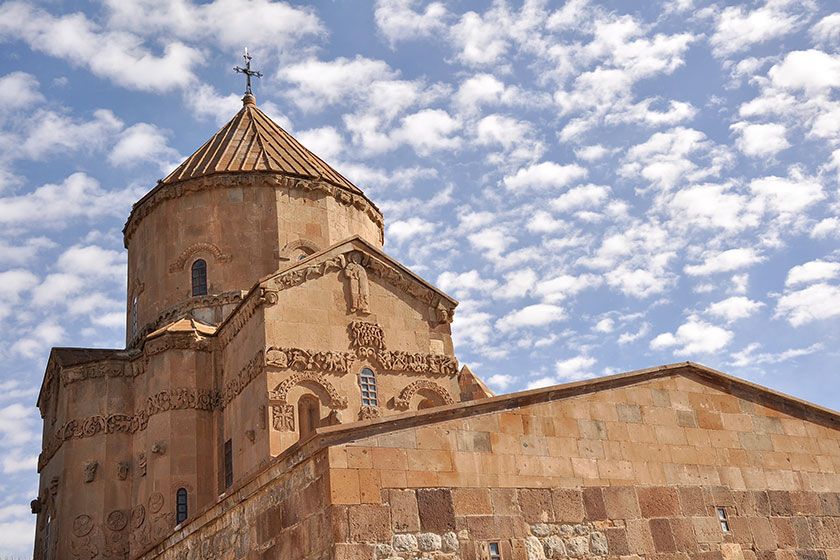 Arasbaran Forests, the territory of the nomads and their handicrafts such as Verni (a carpet-like kilim), the region of hot and cold springs, and the protected area sheltering many species of birds, mammals, reptiles, and fish, is another tourist attraction that attracts many tourists and travelers every year. Some of the historical sites of Arasbaran include Babak Fort, Zahak Castle, and Ahar bazaar. Part of this great mountainous region has been registered as a Biosphere Reserve by UNESCO.

Kandovan village is one of the unique attractions of Iran located 62 km southwest of Tabriz. Kandovan is composed of the houses carved into the rock dating back to the 7th century AD or pre-Islamic period. These cave-like houses are still inhabited by some villagers. It takes less than an hour to reach there from Tabriz. Scenic peaceful landscapes, mineral waters, natural products and herbal medicine, and handicrafts are other attractions of Kandovan. 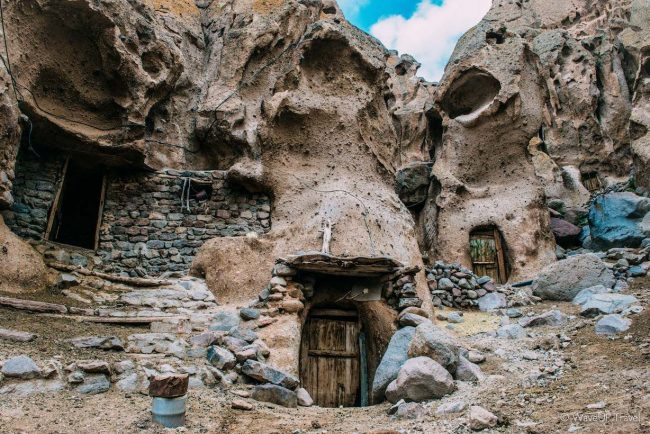 Kandovan village near Tabriz: one of the Coolest Places in Iran during Hot Summer Holidays

Besides visiting the historical and natural attractions, don’t forget to try the distinct luscious sweets and delicious Azari foods in Tabriz!

Uramia, the City of Water

Urmia (or Urmya), the capital of West Azerbaijan province on the northwest of Iran, means the city of water in the Assyrian language. Natural and historical attractions, delectable foods, and hospitable people encourage the travelers and tourists to travel to this part of ancient Persia every year. As it is cold in winter, it is one of the best choices and the coolest places to travel in the summer.

The sixth-century brick and stone cylindrical monument Segonbad (meaning three domes with 13 m height), different spas surrounded by spectacular landscape (such as Haftabad spa), Qasemlu valley (one of the most visited places in the summer), the natural beautiful lakes (such as Marmishu lake), historical schools (such as Qajar Hedayat school), the Safavid historical bazaar (still in use), and historical churches such as St. Mary church, and Marsergiz church are other attractions in Urmia. 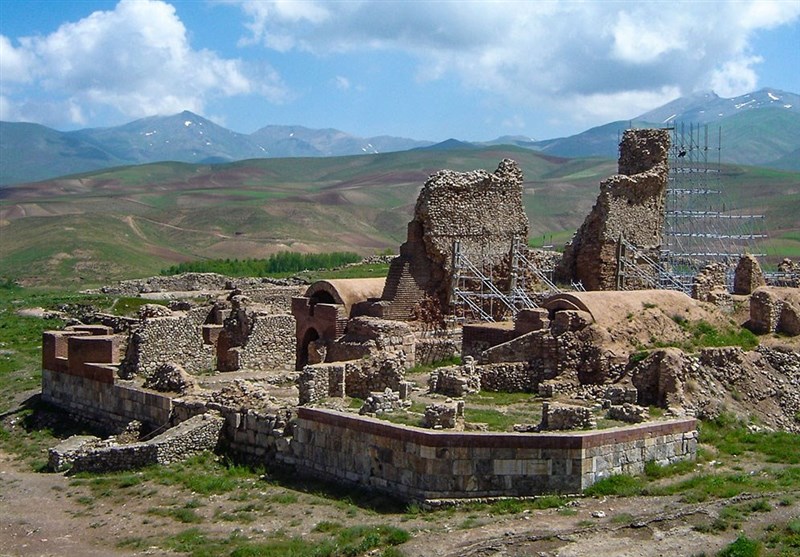 One of the most famous natural attractions of Urmia is Lake Urmia (or Urmmiah). It was the biggest salt lake in Iran (though it has shrunk to 10% of its former size). It has been designated as a Biosphere Reserve by UNESCO and a National Park under the 1971 Ramsar Convention.

Another attraction in West Azarbaijan province is Takht-e Soleyman near Takab about 5 hours away from Urmia. It is worth going farther to visit this UNESCO World Heritage Site when traveling to Urmia. Takht-e Soleyman is a historical area, where the ruins of the Sassanid and Ilkhanid architecture encompass a mysterious lake. Among the constructions, the remnant of the Azar Goshnasp fire temple, one of the oldest and most important of the three fire temples in ancient Iran, is the most prominent. Zendan-e Soleyman (Prison of Solomon) is another ancient complex near the area.

Since this part of the country has been inhabited by the Armenians, there are many traditional churches in West Azerbaijan especially in Urmia. St. Thaddeus Monastery- also known as the Black Church, located in Maku (about four hours far from Urmia) is the ancient structure registered on the UNESCO World Heritage List. 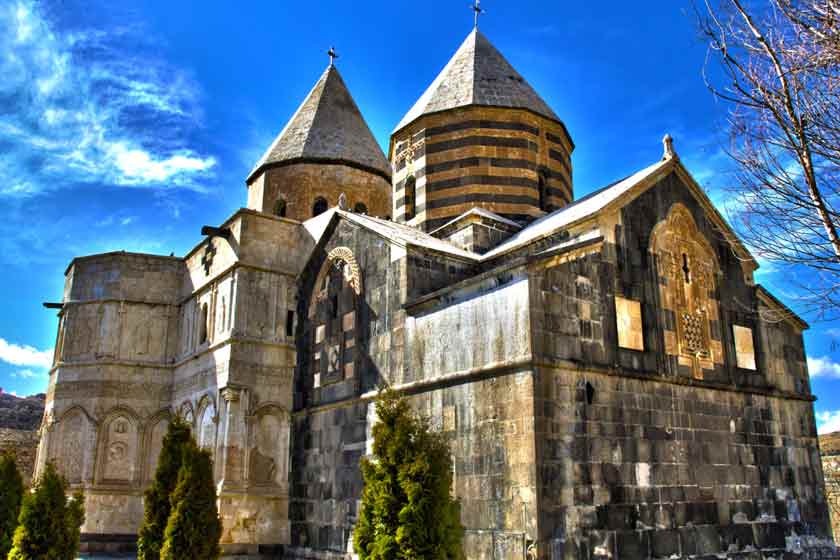 Urmia sweets such as Noql-e Bidmeshk and basloq, traditional halva, and traditional herbal essence are among the most famous souvenirs of Urmia.

As you see, Iran is a country embracing such a great diversity in climatic conditions that it is able to offer the best options to different people with various tastes in all four seasons of the year. Travel to Iran in the summer, enjoy the historical, cultural, and natural attractions, communicate with the friendliest people and experience an unforgettable unique summer holiday. 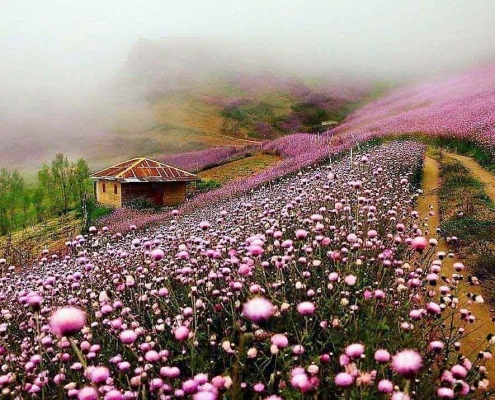 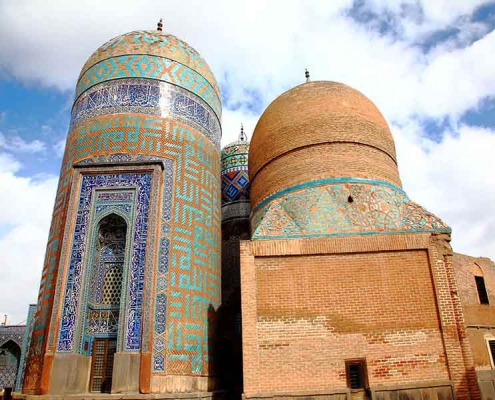 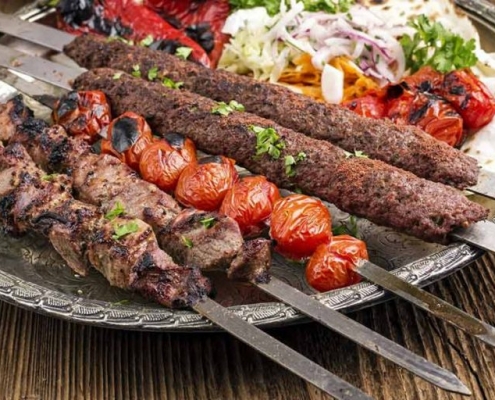 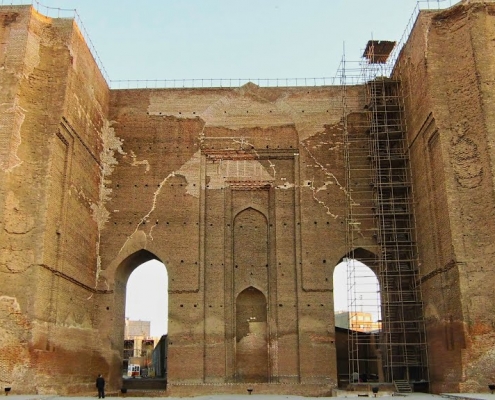 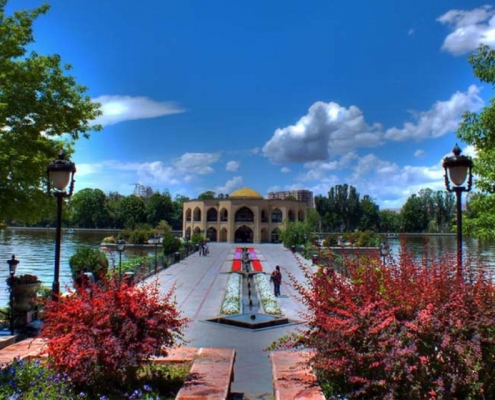 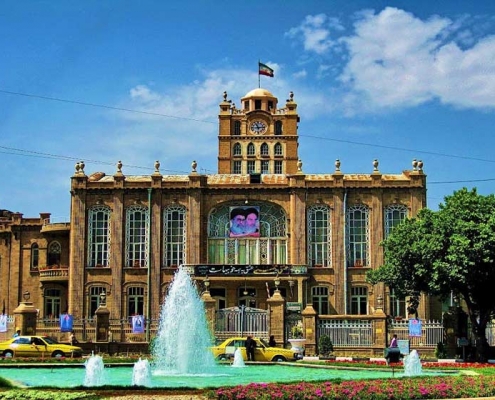 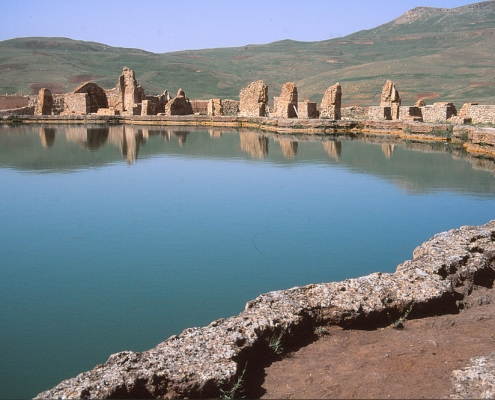 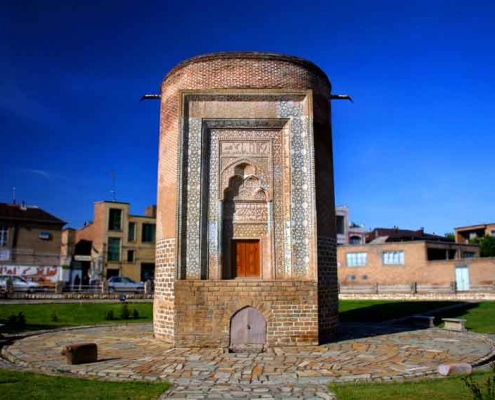