You are here: Home1 / Iran Travel Blog2 / Top places to visit in Tabriz

There is a lot to be explored in Tabriz. This lovely city has embraced many natural and cultural attractions. The historical monuments represent Iran’s rich architecture throughout its deep history. This article introduces the top places to visit in Tabriz; most travel itineraries for Iran do not miss these places while visiting Tabriz.

Dating back to the Safavid period (about 500 years ago), the Tabriz bazaar is not only a shopping center but also an architectural masterpiece. It is one of the oldest bazaars in the middle east, the most unique and the largest traditional roofed bazaar in the world, which has been included in Iran’s UNESCO World Heritage Sites. Walking through the labyrinth-like and narrow lines of his bazaar and looking at gorgeous Iranian products, would fascinate every visitor. Do not forget to look up! The ceiling offers a real majesty of Iranian-Islamic architecture. The corridors are over 1 kilometer long, so make sure to take enough time visiting this glorious building. This Bazaar is among the best Iran Bazaars and top places to visit in Tabriz.

Tabriz Bazaar is located in the city center, so, it is quite convenient to get there. Take the Grand Bazaar buses and get off at Bazaar station, you will reach there after a short walk. If you prefer Metro, Shahid Mohegheghi is the nearest station, and then it would take you about a 10-minute walk along northern Shariati street to arrive at the Bazaar. 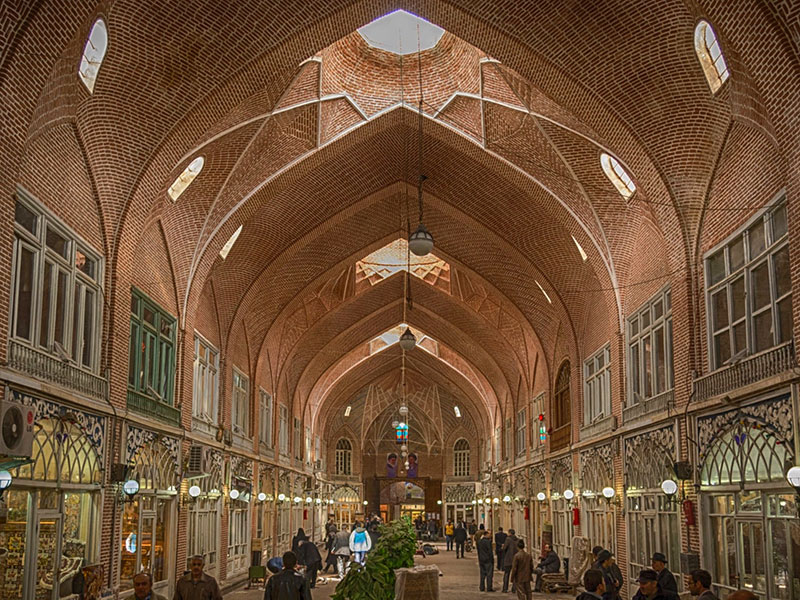 Tabriz Bazaar; the largest roofed bazaar in the world

Mosques are typical Islamic architecture in Iran, which is why every single mosque is unique and has its own character. Located in the southwest of the Tabriz Bazaar, Jame Mosque is shining with its Iranian Islamic architecture. Indeed, it is a complex made of a mosque and a school of Islamic theology.

While walking into the mosque, you can feel a genuine sense of peace looking at the arch and domes, based on octagonal brick pillars, covered with delicate and artistic plasterwork of the 5th century. The colorful windows, lovely tilework, and decoration inside its Shabestan (large roofed hall) have doubled its beauty. At the end of the mosque, there is a place called “Mihrab” made of marble. The Mihrab is designed in a spiral pattern which is a combination of simplicity and unique art. Restorations were conducted in the early Qajar period (about 200 years ago).

The great thing about this mosque is that it is connected to Bazaar, so, you can take time to walk around the bazaar and shop on the same day you pay a visit to the mosque.

Accessing the mosque is possible either by walking through Bazaar or taking the bus to the Bazaar station. 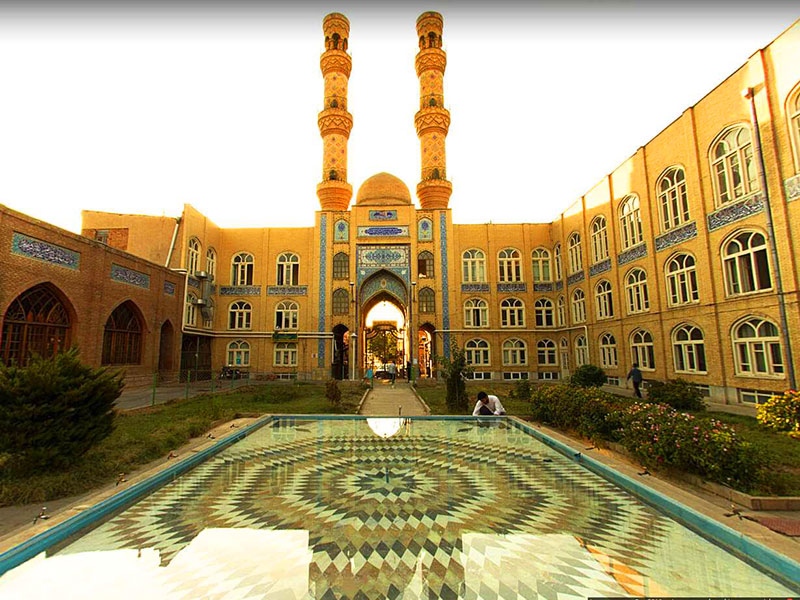 Tabriz Jame Mosque: one of the top places to visit in Tabriz

Blue tilework of all shades applied in this building has named this spectacular mosque, the Blue Mosque. The history goes back to the 15th century built by “Jahan Shah”, king of the time.  However, the destructive earthquake that happened in 1779 in Tabriz, caused the structure to be greatly damaged, only the main entrance hall and Jahan Shah tomb remained unharmed. The scars are still evident on this splendid monument, despite the restorations conducted during the past 50 years.

To arrive at the blue mosque, either take BRT buses to the station right across from the mosque or take the metro to Sa’at square station and then walk to the mosque. 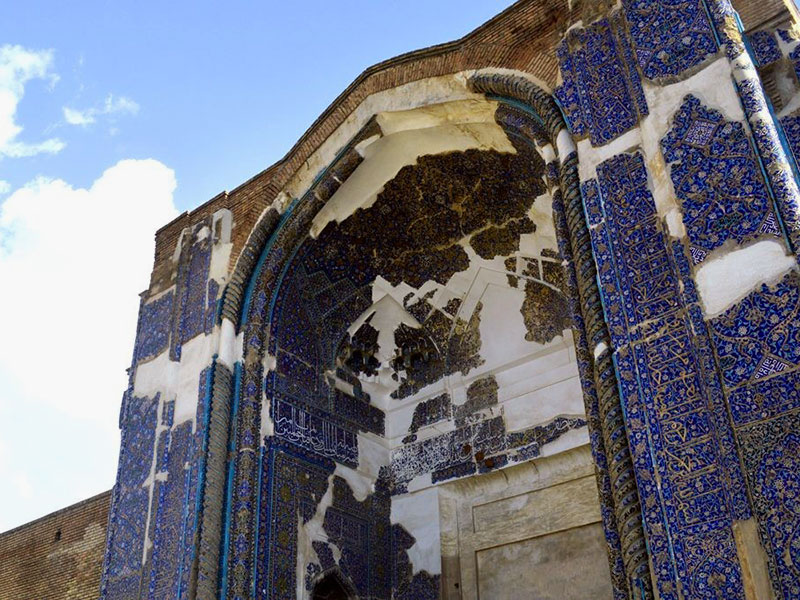 This huge and crumbling citadel is an impressive example of an adobe structure that let you feel the spirit of ancient history. Having been built in the 14th century as a complex of defense by the order of Ilkhanid minister “Alishah”, the building suffered several destructions throughout history, particularly due to the earthquake and Ottoman Turk invasion.

Tabriz citadel has been used for different purposes over time and has gone under restoration several times in history. It was used as an educational center during the Safavid period, a military depot and storage for the Iranian army during the Qajar era and as a mosque after the Islamic Revolution of 1979. The latest renovation was managed by Iran’s Cultural Heritage, Handicrafts, and Tourism Organization in 2013.

To arrive at the Tabriz citadel, take BRT buses to Sa’at Square station. 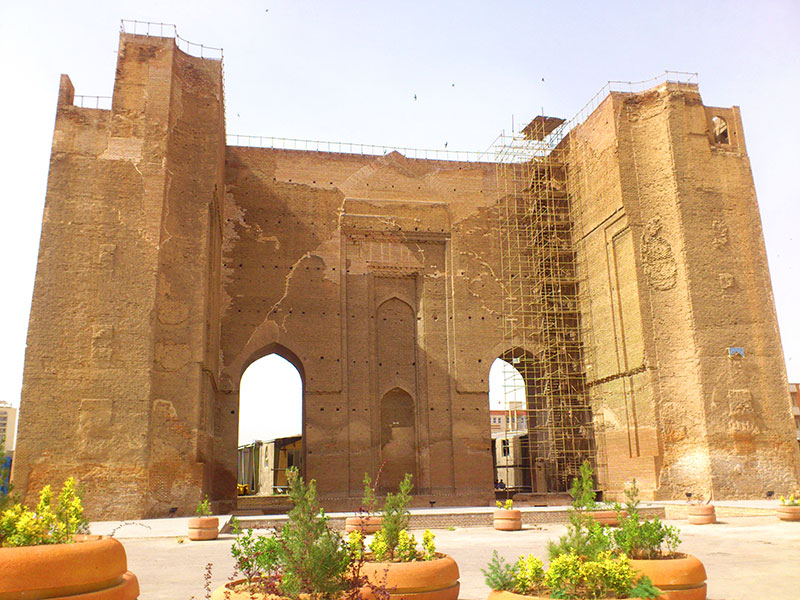 17km west of Jolfa, there is a UNESCO-listed attraction that would catch the eye of any visitor. Regarding the Armenian population who have lived in Tabriz since many years ago, there are several churches in this city, and St. Stepanos is the most visit-worthy one.

The construction date goes back to the 9th century; however, it was seriously damaged in the earthquake and renovated again during Safavid and Qajar dynasties in Iran.

To reach this place, you can either take a taxi or hitchhike from Jolfa and walk up the last 1km to the Monastery, although, it may be difficult for elderlies. The church is located in Jolfa, surrounded by a stunning greenery area; climbing up the mountain behind the monastery would let you enjoy the appealing view of the valley.

The monastery is located near Jolfa; having arrived in Jolfa by train or bus, take a taxi to the church. However, you should walk a distance of about 300 meters uphill, which may be difficult for some elderlies. 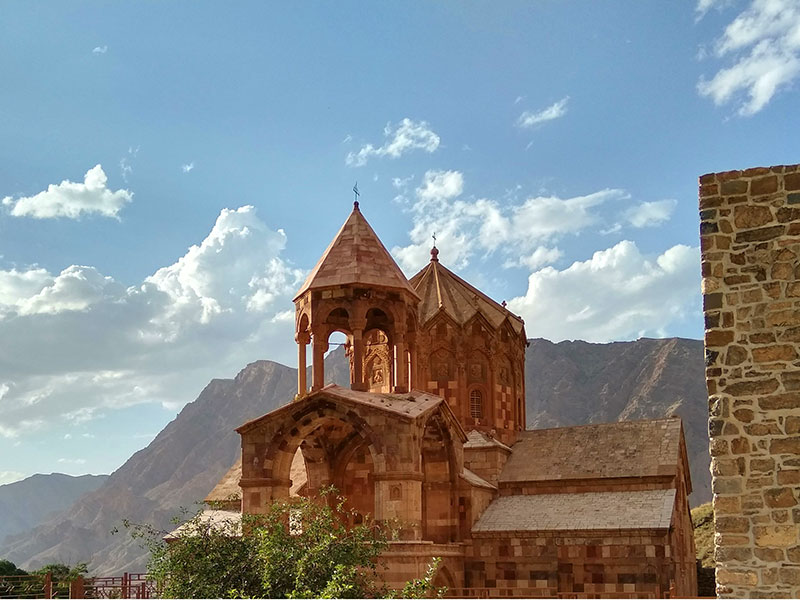 The Kandovan village with its interesting architecture is said to have been partly created by volcanic debris from a strong Mt. Sahand eruption hundreds of years ago. The lava material was probably thrown out and accumulated over the years and later deformed naturally due to wind or water erosion.

What makes this natural wonder special is that 117 families are living here. The homes are carved inside rocks, some of them 700 years old. Being built within the mountain, let the house be cool during summer and warm during winter, since the rock acts as an energy-efficient material. Visiting this village is not only fascinating for its unique natural architectural style, but also for visiting the local’s lifestyle. Kandovan village is among the best places to visit in Tabriz.

The rocky “Laleh” hotel has been constructed to welcome more tourists to this region.

There are minibusses in Osku and also Tabriz you can take to Kandovan. 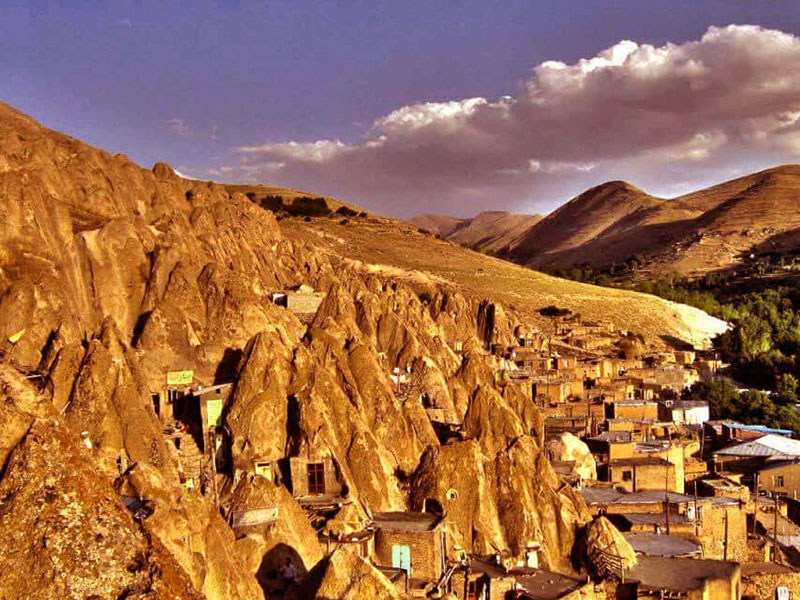