You are here: Home1 / Iran Travel Blog2 / The Coolest Places in Iran during Hot Summer Holidays (Part I)

The North and West of Iran

Every year, many families and solo travelers plan their family vacation or summer adventure for the long summer holidays. Climbing, trekking, hiking, and canyoneering are among the priorities for the adventure seekers. Water activities such as swimming or rafting would really hit the spot during the long hot summer holidays.  Moreover, cultural and community-based tours in cool places are usually favored by both families and adventure lovers. Though Iran is among the countries enjoying amazing diversity in climatic conditions, the first thing that comes to most people’s minds while hearing the name of Iran is a vast hot dry desert! However, the truth is that Iran is a perfect destination offering coolest places and activities in long hot summer days. Iran as a prehistoric land with ancient civilization offers a combination of cultural and natural attractions to the tourists who travel to Iran. Iran as the seventeenth largest country of the world embraces a vast area with a great diversity of climatic conditions. As a result, the travelers who travel to Iran can experience different seasonal activities in different corners of the county all at the same time. Here, you can find a list of the coolest places in Iran to visit in order to escape the heat during hot summer holidays.

Alasht, a Gem Hidden in the Heart of Mountains

Alasht village in Savadkuh County, Mazandaran province, surrounded by the mountains, is one of the coolest places in summer. Alasht means the sanctuary of the eagles in the local language. It may be because of the great number of eagles on the high mountains of this region. It is also the birthplace of Reza Shah Pahlavi (1878-1944)- the founder of the Pahlavi dynasty. The house of his childhood has been turned into the Anthropology Museum since 1968. The famous Veresk bridge- built before WWII- that connects the railway between Tehran and Gorgan is located in this area too. It was known as the Bridge of Victory (Pol-e Piruzi) during WWII. 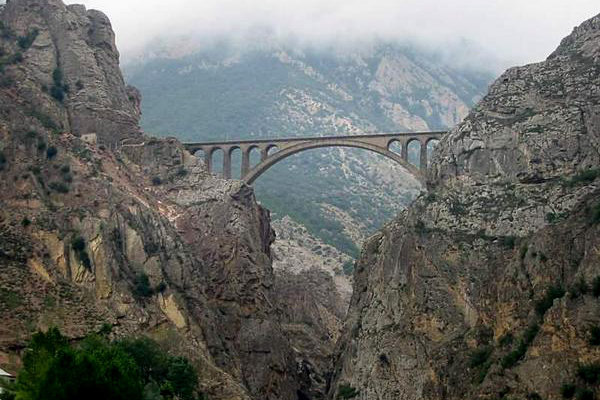 Alasht region is filled with many beautiful waterfalls. One of the most beautiful waterfalls is Narm waterfall in the village of Cheart, 35 km southwest of Alasht. South part of the city, a small sanctuary is located named Dokhtar-e Pak (the pious woman) temple. It was a Zoroastrian (or Anahita’s) temple before Islam. Only women are permitted to get in. The picturesque Alasht with its pleasant weather holds the only observatory in the north part of Iran that provides a good opportunity for those who are in favor of stargazing. Alasht is a good example of the combination of traditional and modern lifestyles. The historical region was inscribed on Iran’s National Heritage List as well. The handicrafts of Alasht especially hand-woven products such as Jajim could be nice souvenirs for families and friends. 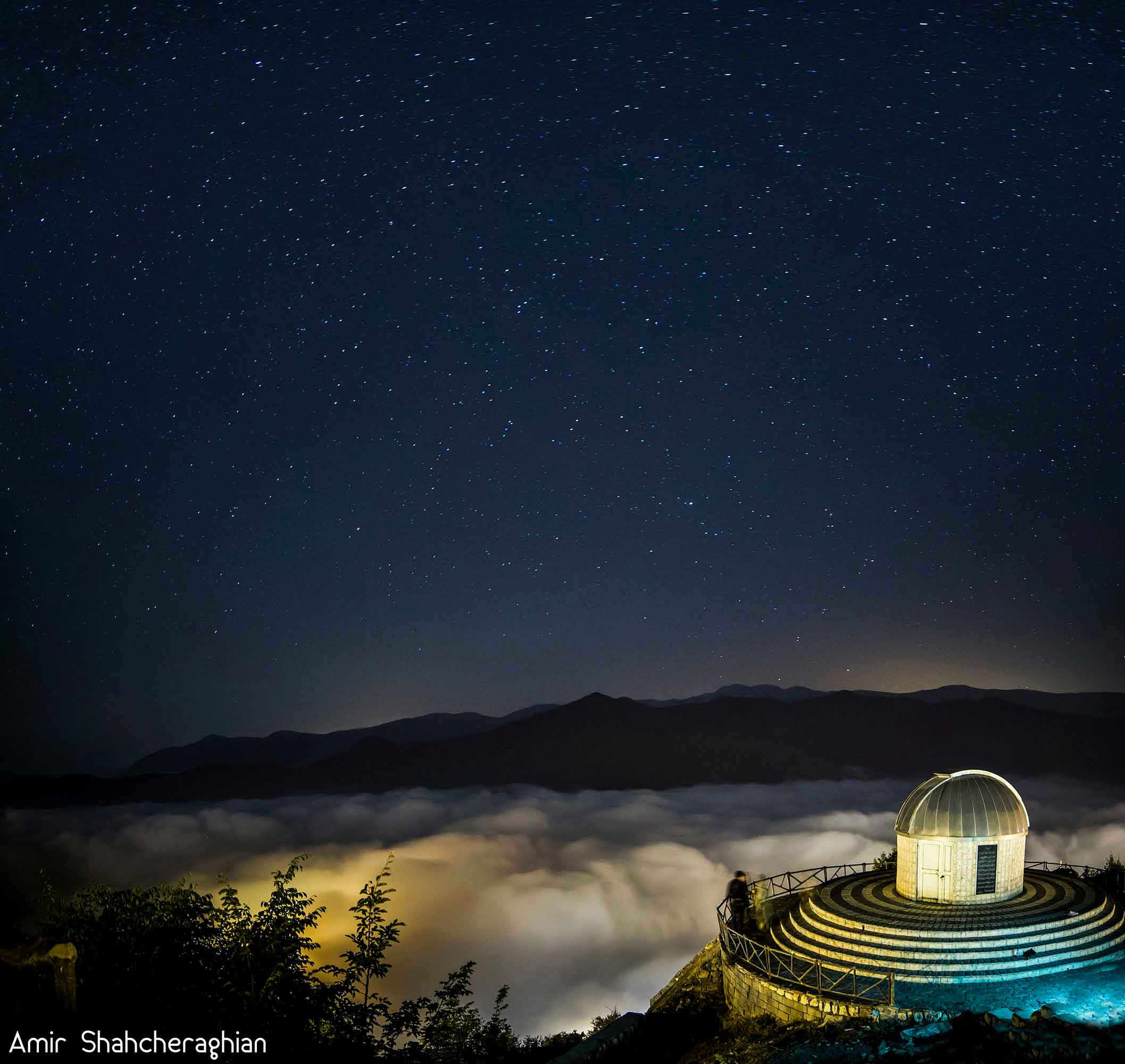 Though Gorgan is a spectacular place for holidays in all seasons, it is one of the best destinations for summer vacation. It is located in Golestan province where boasts having many historical sites, wide ethnic diversity, numerous cultural and amazing natural attractions. It is one of the greenest regions of Iran housing the dense forests, springs, wetlands, and waterfalls. One of the most interesting cultural attractions here is the peaceful combination of different ethnic groups such as Baluch and Kazakh people.

Gorgan is well-known for its picturesque forests. It is a city interwoven with the verdant Alangdarreh forest park on one hand and the ancient unique Hyrcanian forests on the other hand. So, it is the best choice for those who love exploring the nature or the solitude of the forests. 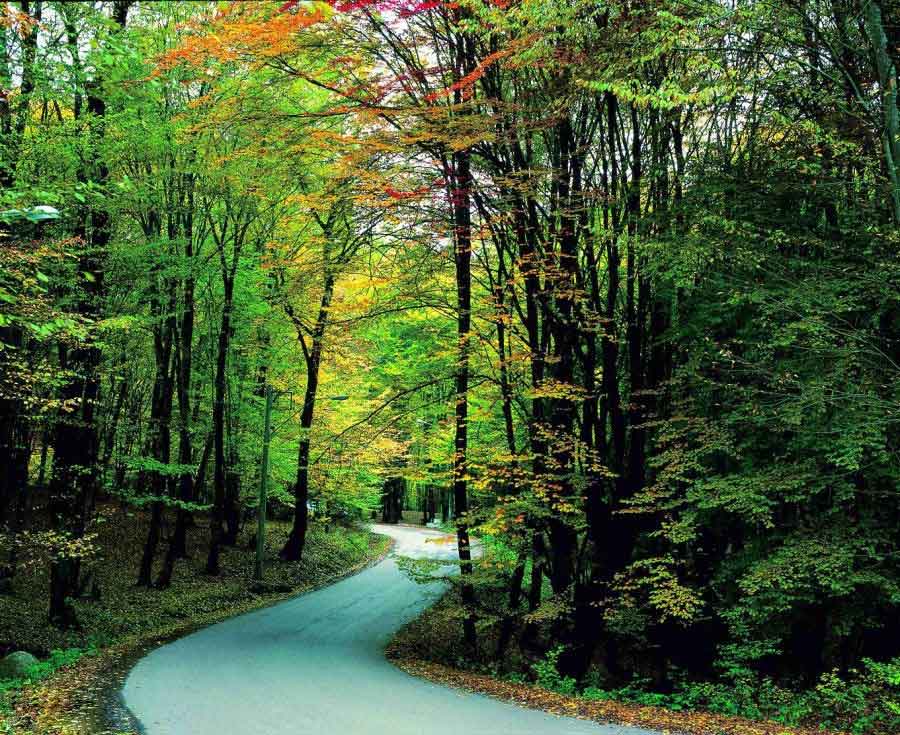 One of the amazing places of Gorgan is Golestan National Park. It is a protected area encompassing lush forest and various species of flora and fauna and wildlife. It houses about one-eighth of the plant species. Jahan Nama in the south of Gorgan is another protected area in the province. It is the home to the different species such as the wild goat and the panther. Naharkhoran forest, 4 km south of Gorgan, is a part of the fourty-million-year old Hyrcanian forests and one of the most popular natural attractions. It has also been the place where the pilgrims of Imam Reza holy shrine in Mashad stop for getting some rest and having lunch (Nahar means lunch). About Seven kilometers from Naharkhoran, after passing through a breathtaking road in the rainforest, Ziarat village stands atop a hill. It is one of the top twenty exemplary rural destinations of Iran that encompasses the only spa of the province. One of the most featured of cultural attractions here is the 55-meter high Gonbad-e Qabus, the tallest brick tower in the world registered as the UNESCO World Heritage Site. It dates back to approximately one thousand years ago. The only Persian island in the Caspian Sea that is named Ashouradeh is another must-see site. The tourists and holidaymakers who are interested in visiting there can go to Bandar-e Torkman from Gorgan and then take a boat to the island. Ashoura Deh is one of the most desirable places for the bird-watchers or birders. Another amazing attraction in the region is the Great Wall of Gorgan. This wall that is about 200 km long is a defensive construction lined by 38 forts. It is the longest fort-lined ancient barrier between Central Europe and China that amazingly dates back to the Sassanid era (5th to 7th centuries). The tourists who crave for a panoramic view of the city are recommended to visit Gorgan tower. It is a revolving restaurant with 57 m height where the guests can experience a 365-degree view while eating or drinking. They can also find lovely local handicrafts in Nalbandan traditional bazaar in case they wish to take some souvenir from this part of Persia to their homelands. The bazaar is a place for finding best hand-woven products by Turkmans such as Namazlik or the prayer carpet. 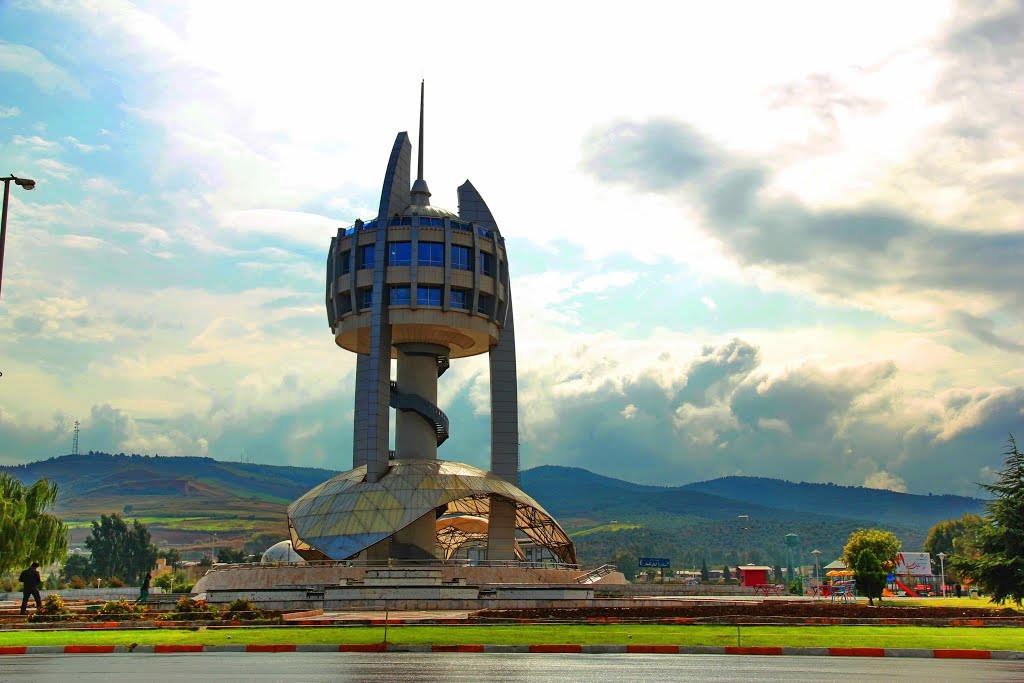 The Maran Castle (a relic dating back to the Parthian era), the Qajar Taghavi House, Gorgan Palace Museum, Gorgan Handicrafts Museum, the ninth-century bridge of Espi Qale (18 km from the north of Grgan), the palace of Aqa Mohammad Kahn (the Qajar palace), Jame Mosque (dating back to Seljuk era), the ninth-century Aq Qala bridge, the eye-catching Loveh waterfall with 75 m height, and the picturesque Rango waterfall near a campsite for the eco-tourists and the mountaineers are some remarkable natural and historical attractions of Gorgan.

Gorgan is a perfect choice for the avid foodies as well because of its great diversity in kebabs. 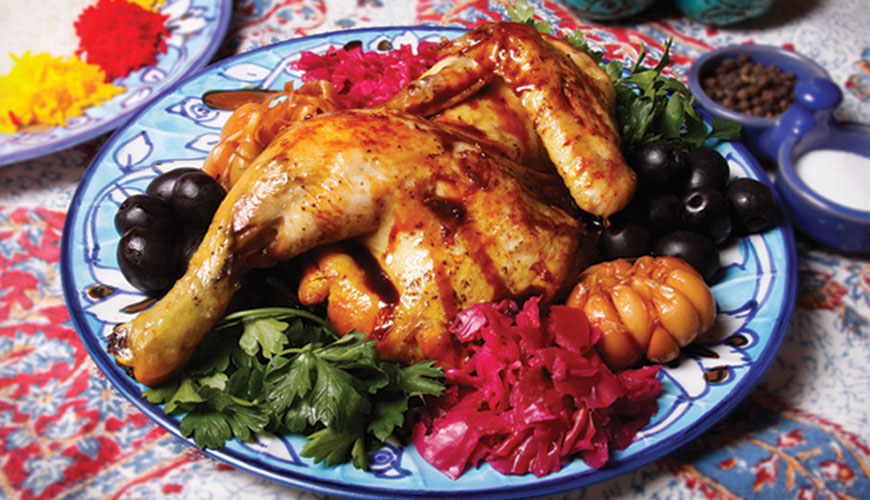 Masuleh, a Village with Unique Architecture

Masuleh is a mountainous historical village in Fuman County, Gilan province in the north of Iran. It is one of the coolest places in summer with bracing weather and usually covered with fog. On the slopes of Alborz Mountain Range, where it blocks the warm moist air blowing from the Caspian Sea, the trees of the dense luxuriant forests sway in the misty weather and provide a cool atmosphere for those who seek an unforgettable experience of chilling out in hot summer days. The houses here are covered with yellow clay so as to be recognized better in dense fog. It is located right up to a scenic valley with dazzling emerald green forests and waterfalls. The surrounding mountains offer good opportunities for climbing and trekking lovers. The structure of houses in Masuleh is unique; they are in a stair step so that the yard of the building above is the roof of the building below. The yards and the roofs are used as the streets. Regarding the structure of the village with many stairs and the shape of the narrow streets and because the village pathways and the roofs are not distinguishable, the motor vehicles are banned in Masuleh. The unique structure of mud-brick houses, eye-catching natural landscape such as Kosham waterfall, refreshing climate, and lush forests have made Masuleh a tourist attraction hosting many enthusiastic travelers and tourists who travel to Iran every year. The traditional handicrafts in its bazaar such as kilim, jajim, chamush (traditional shoes), and knitted dolls are best souvenirs of this spectacular village. 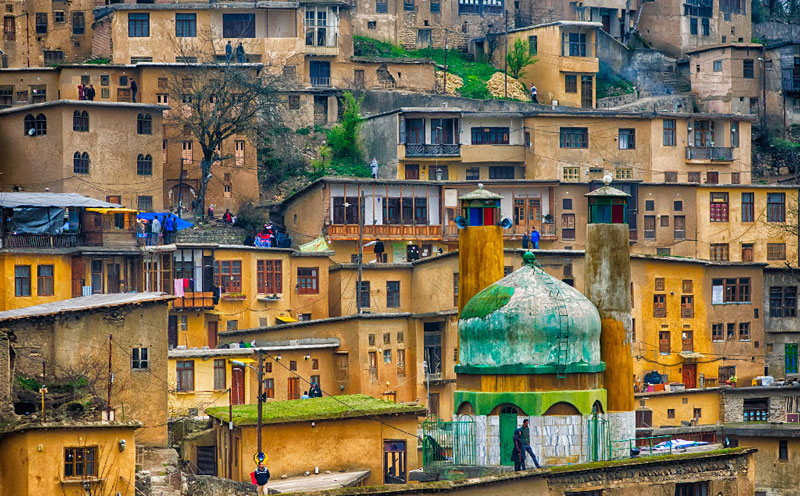 Hamadan- the capital of Hamadan province- is one of the beautiful ancient cities on the west part of Iran. It could be considered as the paradise of ancient culture for all culture lovers. It is known as the capital of Iran’s ancient civilization and old history. It was named Hegmataneh in Median era. It is one of the coolest places in hot summer holidays and it embraces many ancient cultural and natural attractions. Today, Hegmataneh hill is still under excavations to find more documented details about one of the origins of human civilization. It is the first capital of ancient Persia dating back to the Median and Achaemenid era. 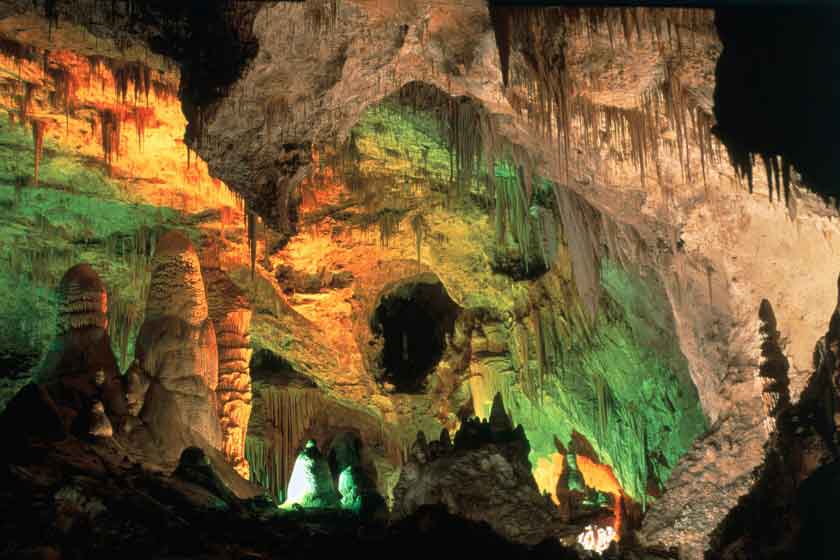 Alisadr Cave, the longest water cave in the world, Iran

An introduction to highlights of Hamadan’s numerous tourist attractions includes:

Alisadr Cave (the longest water cave in the world), Ganjnameh (holding the Achaemenid inscriptions and the waterfall of Ganjnameh, tele cabin and chairlift), Ganjnameh cave aquarium, Nooshijan hill (one of the rare remains of pre-Achaemenid adobe structures), the tomb of Baba Taher (the great Persian poet), the stone lion statue dating back to Median era, the tomb of the prophet Heyquq (the Seljuk structure), Mishan Plain (good for trekking; the road before trekking starts would lead to the Achaemenid inscriptions of Darius and Xerous), the tomb of Esther and Mordechai as the holy site for the  Jews, Alavian Dome (a masterpiece of Islamic stucco and brickworks dating back to Seljuk period), Hamadan Qajar traditional roofed bazaar, Qale Hamam (the formerly Qajar public bath changed to the Anthropology museum), Natural History Museum, and Ave Sina’s tomb (the genius Iranian physician, scientist and philosopher). The tomb modeled on 1000-year-old Gonbad-e Qabus and displays Ave Sina’s invaluable hand-written books and writings, medicinal herbs, ancient coins, pottery and other objects. 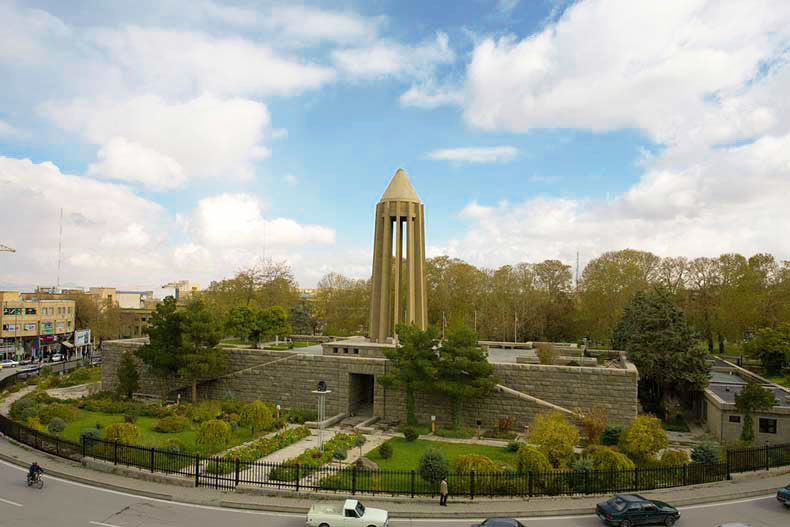 Tomb of Ave Sina in Hamadan, one of the oldest cities in Iran

Hamadan is one of the coolest places in Iran during hot summer holidays, such a destination would please different tourists with different tastes as it offers a great variety of attractions to the holidaymakers who travel to Iran. 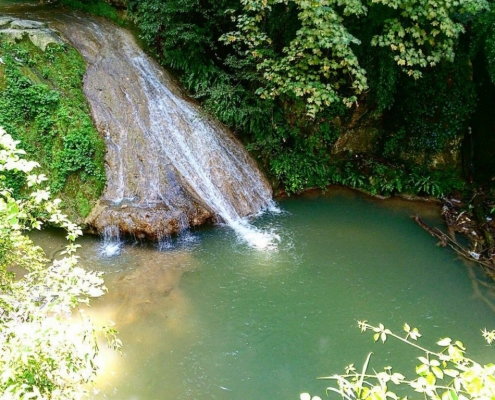 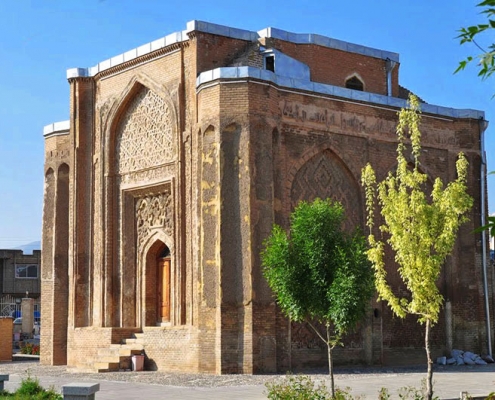 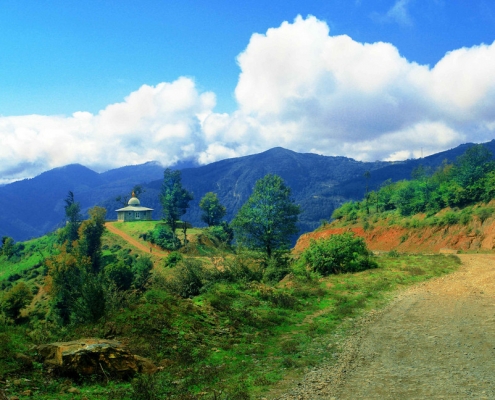 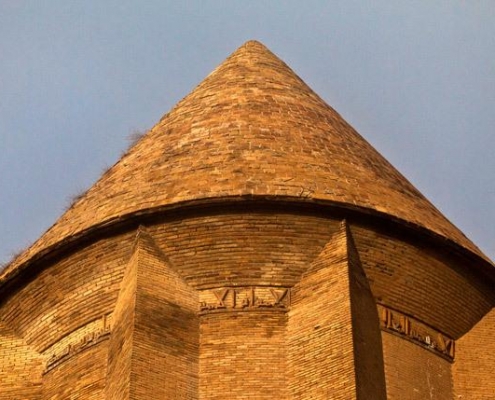 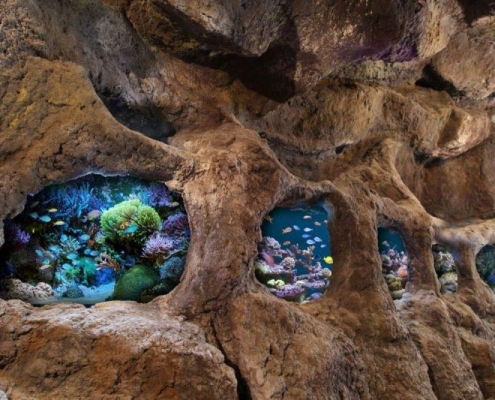 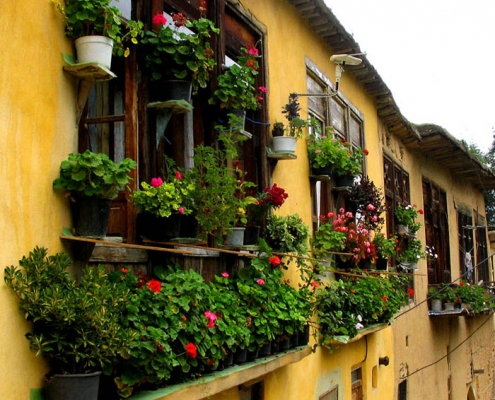 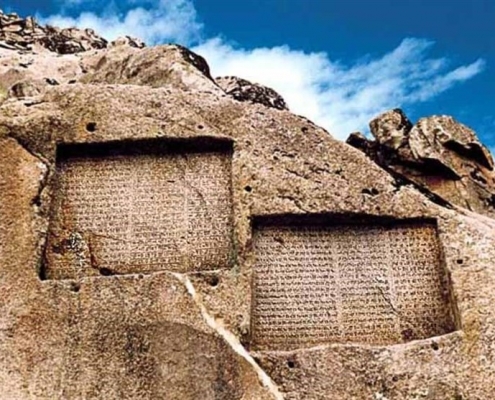 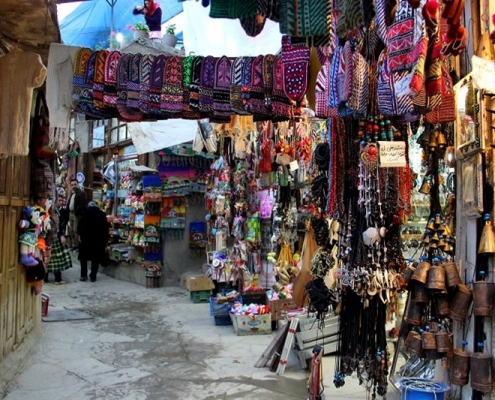