You are here: Home / Iran Travel Blog / World Heritage Sites on West and North-West of Iran

If Iran attracts you for its alluring culture and history and you want to travel to Iran to see the fascinating world heritage sites, it’s good to know that most of these sites are gathered on the western part. In fact, nine out of twenty-two UNESCO cultural world heritage sites are on the west and north-west of Iran. And the other interesting fact about Iran a predominantly Muslim country is that it has three churches on the list of UNESCO and they are among the oldest churches in the world.

The monastery of Saint Thaddeus, known as Qarekilisa (Black church) is the oldest Armenian Church in the world. It is called the black church because the structure is made with black colored stones. Saint Thaddeus known as Saint Jude as well came to evangelize Armenia and Persia where he was martyred. He was buried in the region and a church was built and dedicated to him in 68AD. Over the years the structure was damaged by the attack of Genghis Khan and then a major earthquake in 1319. The monastery was repaired and renovated with black stones in 1691. And in 1810 bishop Simeon added another structure to the west side of the church, built with white stones. Both structures have cone-shaped domes.

Qarekelisa is one of the national treasures of Iran. It is a valuable structure in terms of size and technique of Armenian architecture. On the last weekend of July Armenians, Assyrians, and Catholics come to the Qarekelisa and camp around the church for a ritual celebration from Iran and the neighbor countries. 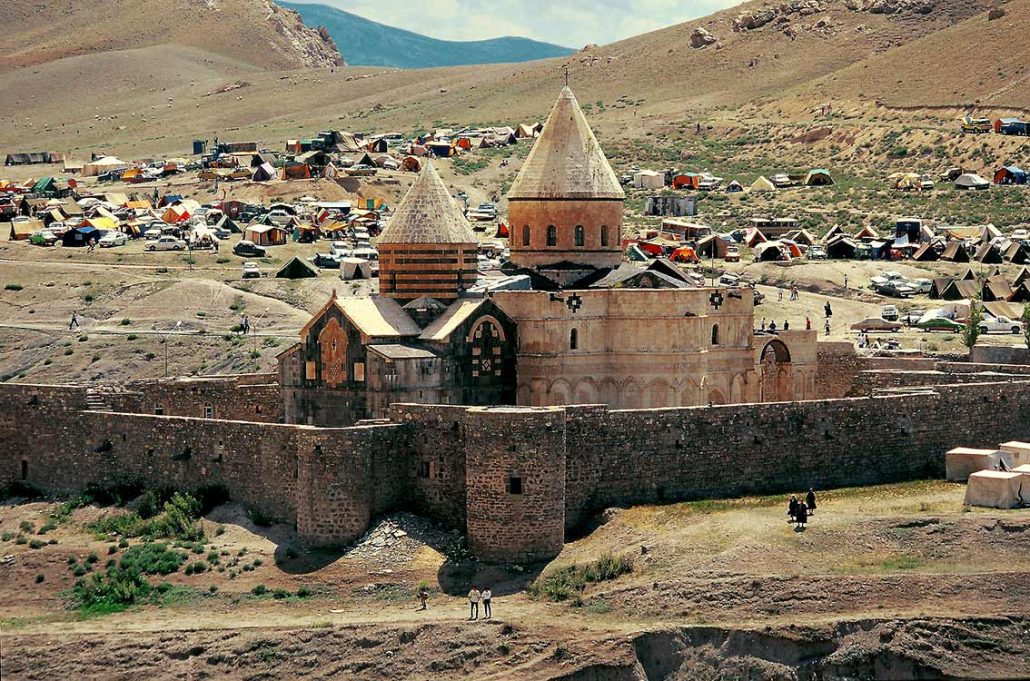 St. Stepanos Monastery is the second most important Armenian church of Iran after Qarekelisa that you will visit during your travel to Iran. The church sits in a valley surrounded by mountains close to the Aras River by the border of Iran and Armenia. Some say the monastery was built in the 9th century, but many Armenian historians believe it was built in the first century by St. Bartholomewand according to a plaque outside the church. The monastery is surrounded by a fortress with seven towers. Both the cylindrical tower and the bell tower have a cone-shaped dome. The structure is well preserved because it has been renovated multiple times during Safavid and Qajar eras after a number of earthquakes. St. Stepanous has remarkable designs inside and out and resembles Armenian and Georgian architecture. The interior walls are covered with paintings and the altar has a painting of Virgin Mary holding the baby Jesus.

Some Armenian Christians believe the bones of Saint Stephen, Saint Matthew, Prophet Daniel, and the successors of the Apostles of Jesus are being kept in this monastery. 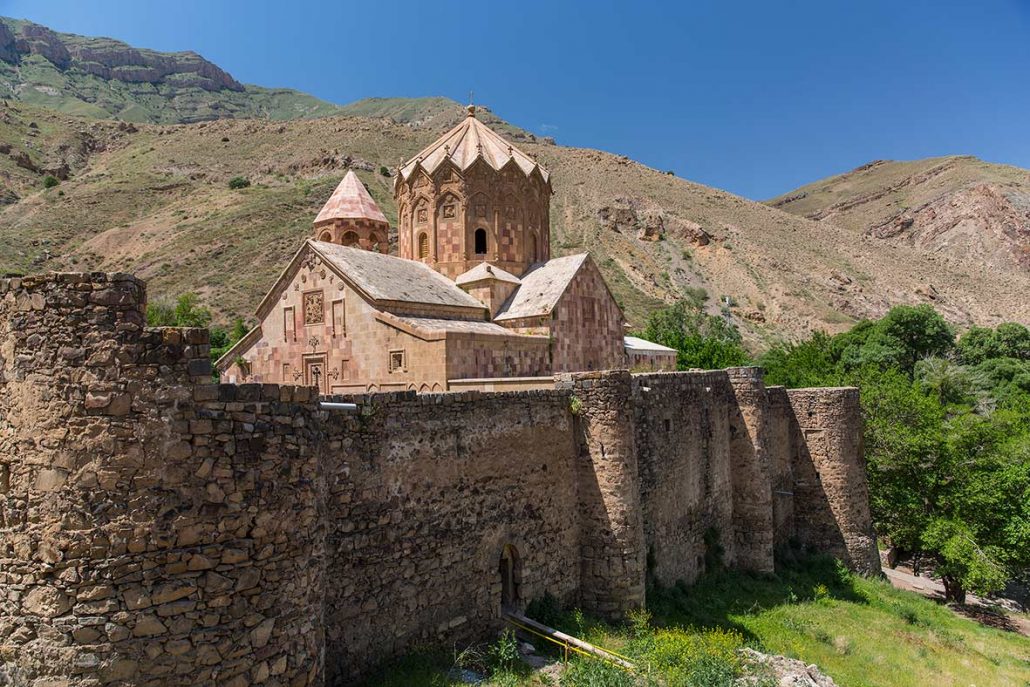 The Chapel of Dzordzor or the Holy Mary Chapel, the smallest of the three, is an abandoned chapel sitting in a valley on the bank of Maku River close to a village named Barun. The chapel is what has remained from a bigger monastery. Dzordzor was built in the 14th century by an archbishop as a place to teach religious, cultural, and literary educations by one of the famous Armenian literary figures, Hovanes yerznkatsi-Tsortsoretsi. The structure of the chapel is very simple using different sized stones and very few decorations around the windows. In 1988 the church was moved 600 meters away from the initial location after seeking agreement with the Armenian Apostolic Church and UNESCO because otherwise it would be flooded following structuring a dam on the Zangmar River. 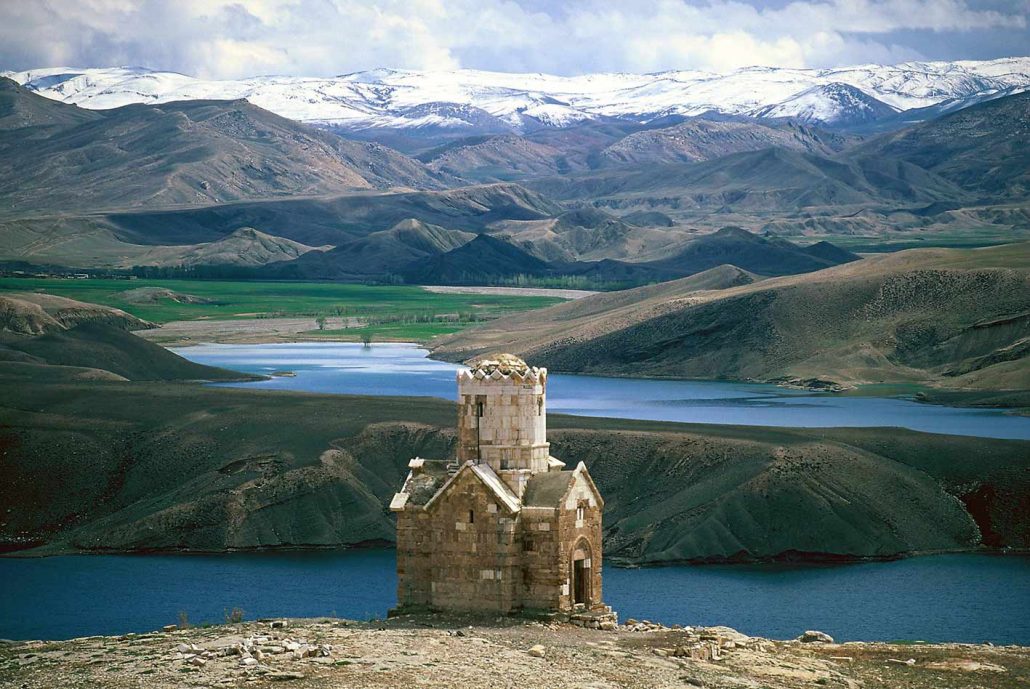 The other world heritage site in East Azerbaijan province is the Tabriz Historic Bazaar Complex. Bazaars are gigantic, super crowded, magical, and charming spots in a city. Bazaar in Iranian culture has an essential role in the development of the cities. Besides being the economic hub the bazaar is a place for social, political, cultural, and civic activities of people. This characteristic was more obvious in the past to the point that the merchants of the grand bazaar of Tehran had a major role in regulating Iran’s constitution in 1905. The Tabrizi merchants did the same thing for nationalization of the oil industry in the early 1950s. Tabriz, the second oldest city in Iran and the capital of stunning hand-made rugs, sits on the Silk Road connecting east and west since antiquity. Tabriz Bazaar expands in seven sq km and has 24 caravanserais and 22 impressive Timchehs (domed halls).

The magnificent architecture of Tabriz bazaar with stunning vaulted roofs plus its ancient history going back to the 12th century made this structure so valuable in history and culture that was registered as a world heritage by UNESCO in 2010. The social-cultural complex has developed over centuries with beautiful brick arches, walls, and ceilings that give it more atmospheric look. It is the heaven of Persian souvenirs such as handmade carpet, rug, and aromatic spices. 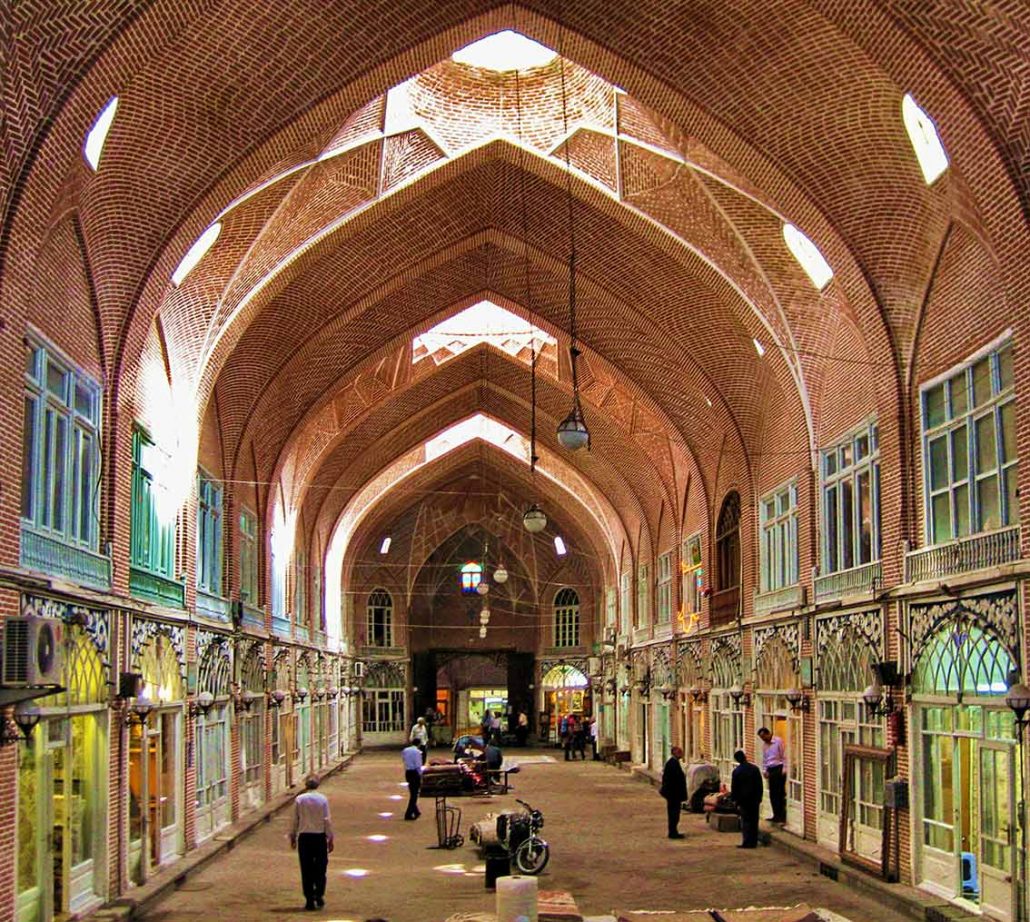 Next breathtaking monument is Sheikh Safi al-din Khānegāh and Shrine Ensemble in Ardabil.

Sheikh Safi was a highly respected figure among people for being a very knowledgeable and genuine man. And after his death, his mausoleum became the most valuable and sacred place for his descendants, especially during the Safavid dynasty. Sheikh Safi is the ancestor of Shah Ismail I, the founder of Iran’s Safavid dynasty (1501-1722). The mausoleum is the biggest and most complete Khanqah in Iran.

The shrine of Sheikh is built with seven segments referring to the seven stages of Sufi theology and it is separated by eight sections representing eight practices in Sufi Tariqat. The Sufi leader was so gratefully respected that Maqsud Kashani and a big team of weavers spent sixteen years on weaving the masterpiece of Persian carpet with silk and wool in AD 1539 – 1540 and donated the pair to the shrine. The pair is oldest dated Persian carpet in the world, but their faith took them to two different museums, outside of Iran. 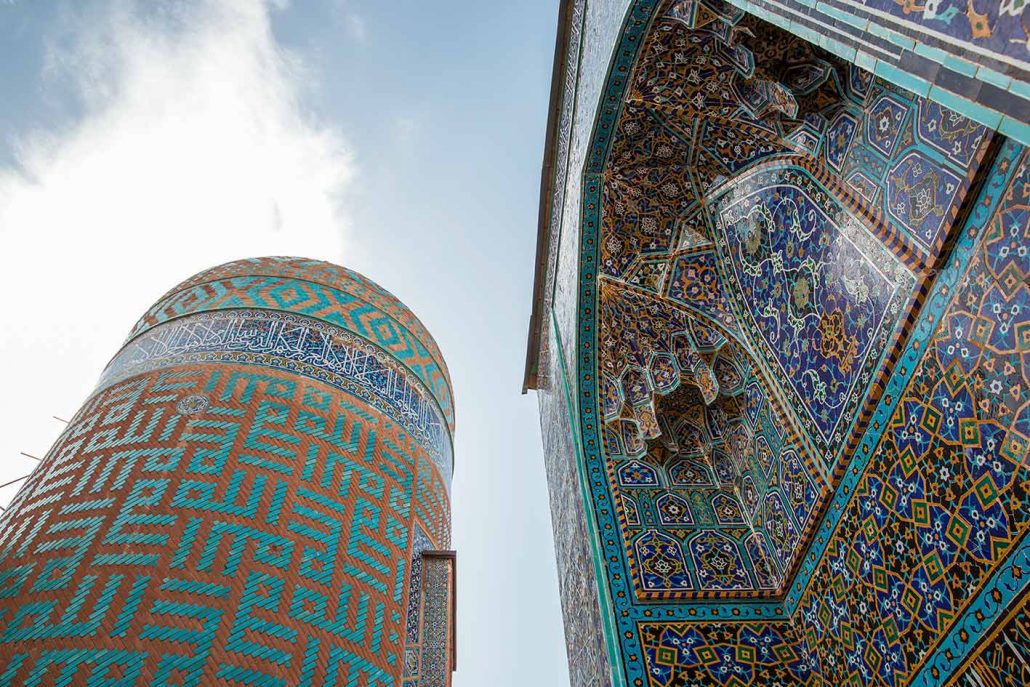 Right under the East Azerbaijan province, there is Zanjan where it was the capital of Ilkhanid dynasty, Mongol dynasty, who ruled in Iran from 1256 to 1335.

We want to introduce you the structure that Arthur Upham Pope described it as the anticipating of Taj Mahal. Indeed Soltaniyeh Dome is the gemstone of Zanjan. It is the biggest historic monument in Iran and the third in the world.

The historical city of Soltaniyeh was the capital of Mongolian Il-khan dynasty that holds the largest brick dome in the world. Dome of Soltaniyeh, a world heritage site is a 50m tall double-shell dome sitting on an octagon-shaped base and is the mausoleum of Il-khan Öljeitü also known as Sultan Muhammad Khodabandeh. Khodabandeh originally was a Shaman, changed his religion several times and when he converted to Shi’a Islam he chose the name, Muhammad.

This beautiful monument has an exquisite architecture inside and outside and mesmerizes you by its huge size and gorgeous detailed decorations. The exterior of the dome is covered by turquoise-blue tiles that make it look huge and strong just like the sky. Eight slender minarets surround the dome which their functionality is not found yet. The light beam that passes through small and big windows on the structure creates a beautiful scene at every time of the day also they function as a light clock.

Sultan Muhammad wanted to make Soltaniyeh a well-known city in the world so he ordered a masterpiece to be built. 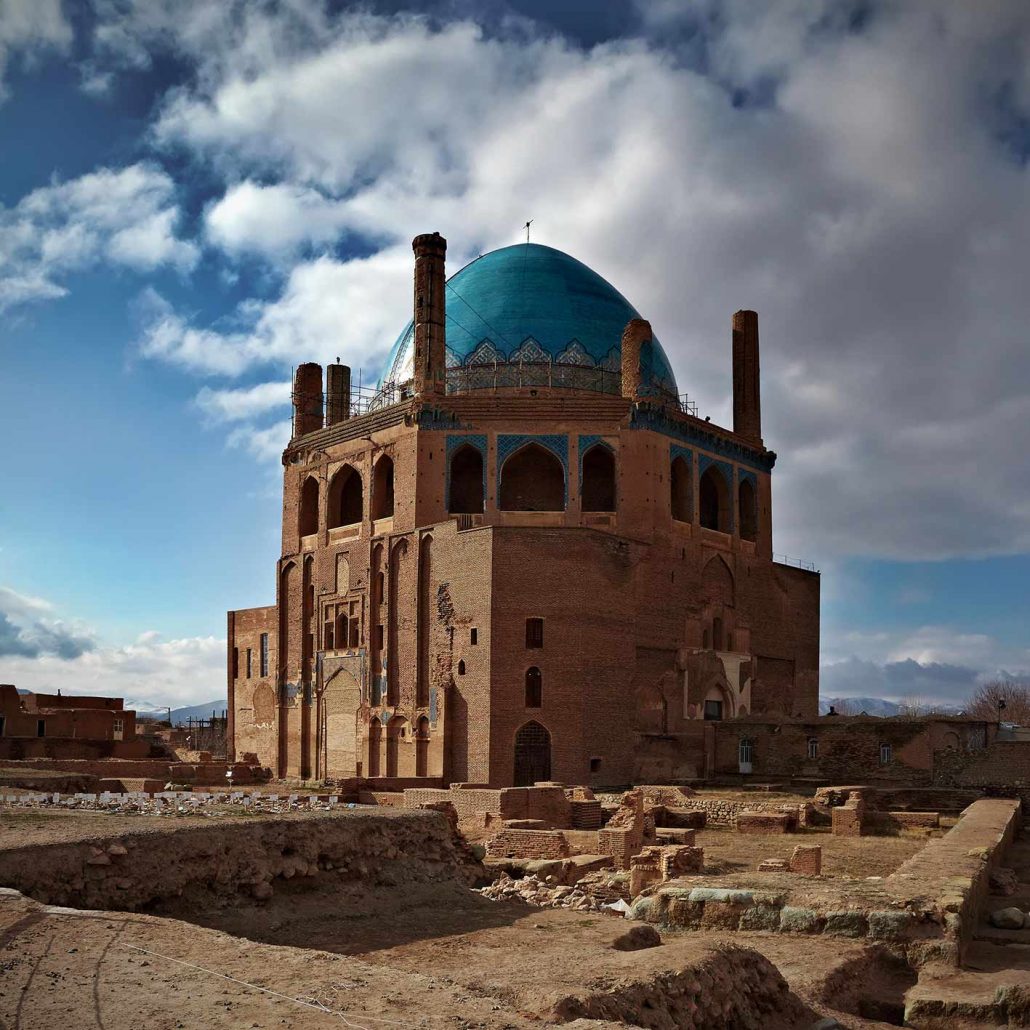 A little toward the south of Zanjan in the city of Kermanshah there is a very important road connecting the Iranian plateau with Mesopotamia, one of the cradles of civilization. The road has been here since the kingdom of Cyrus the Great. Today this road is a critical location connecting east and west, and the huge inscription of Darius I on the cliff amazes every passenger passing it.

The Bisotun inscription is the biggest inscription in the world and the very first Persian written text that contributed a lot to understanding the history of the time.

Bisotun, originally Bagastana meaning “place of god”, has always been a sacred location which was the reason Darius chose it to picture his victory over Gaumata a Median magus, who led a rebellion against the king of Persia, to illustrate his power to every person passing this road, to the end of the time, and become immortal.

Before the bas-reliefs and inscriptions were translated by European researchers, locals believed the engraving tells the story of Shirin and Farhad, a tragic love story written by the great Persian poet Nezami Ganjavi. This mythology is one of the most legendary stories and everyone knows it very well. The story ends with the tragic death of Farhad and it is the ending that made Shirin and Farhad such a great reputation. People still believe if you listen closely you will hear the sound of Farhad’s ax on the mountain.

Bisotun is a very valuable document not only for Iran but also for the world because it is the only official document that shows sovereignty and re-establishment of the greatest empire in the world by Darius I. It became a world heritage site in 2006.  The bas-relief 80m above the ground on the lofty Bisotun Mountain has an ancient beauty that gives you a great sense of the days Persia was the most powerful empire in the world. 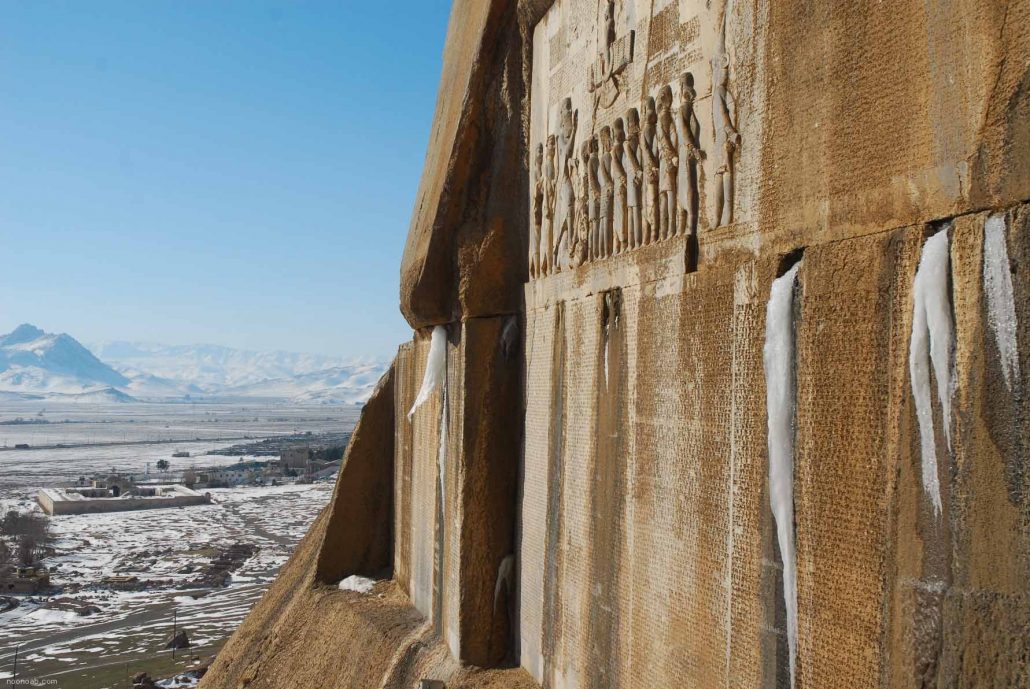 Takht-e Soleyman is a must-visit for those who travel to Iran. The name means Throne of Solomon in West Azerbaijan province, also known as Azargoshnasp “The Fire of the Warrior Kings” is a historic complex consisting of palaces, fire temples, the Prison of Solomon, and a mysterious lake. The complex was registered by UNESCO as a world heritage site in 2003.

The structure belongs to the first millennium BC and it was used by Sassanid and Ilkhanid kings. Takht-e Soleyman complex functioned as an educational, religious, and worshiping place in the pre-Islamic era. 1800 years ago only Sassanid king and high military people could come to this fire temple. Some historians believe the Sassanid kings walked from Ctesiphon to the Azargoshnasp fire temple after their coronation, showing the great value of this structure in its glory days.

There has never been any deep and comprehensive excavation done in the complex, so there are many myths and legends about this place. For instance, people say Zoroaster (the ancient prophet of Iran) was born here, or King Solomon struck his stick to the ground and a spring started flowing and created the oval shape lake in Takht-e Soleyman. This story made the lake a very special and sacred spot suitable for religious sacrifices. People would throw their valuable items such as gold and jewelry in there. Cyrus the Great initiated this act when he threw all of the gold he earned by defeating the king of Lydia. All the gold and treasures are still under the water on the lake floor and have never been excavated.

The lake has an artesian spring source and Zoroastrians believe this spot is one of the main locations on earth where the energies merge together which makes this lake sacred. One interesting fact about the lake is that its temperature stays the same during summer and winter. 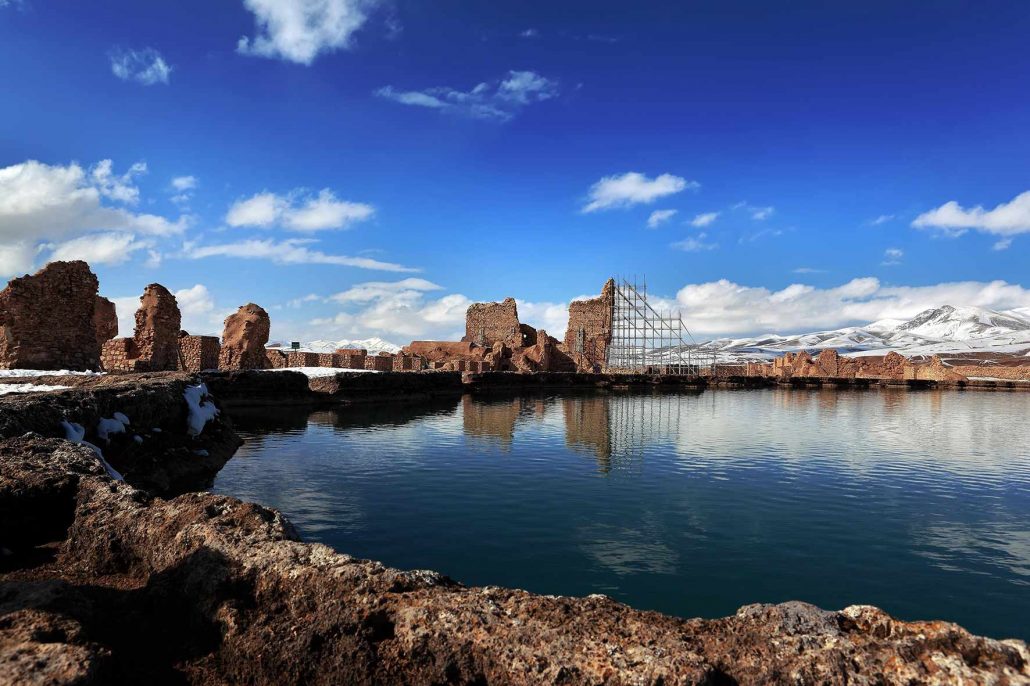