Everything – or quite everything – is relative, many may say – and this applies also to our road traffic opinions. Depending on the country you come from, the country you live and whether you traveled to certain places, as for example India, sadly famous for near-total chaos on the city roads. Those who lived there say that Tehran is very quiet, comparing to Mumbai! So, how is Tehran traffic?
I was never in India and coming from a country where road traffic is disciplined and rules mostly respected, mainly because enforced $$$ painfully by police and thousands of street cameras and photo-radars – I had really hard shock during my first days in Tehran (same goes on in other Iranian cities, btw). But as you can imagine, in the megapolis with over 2 mln cars and an unspecified number of motorbikes, the traffic is monstrous, and I needed only…to cross the streets from time to time! 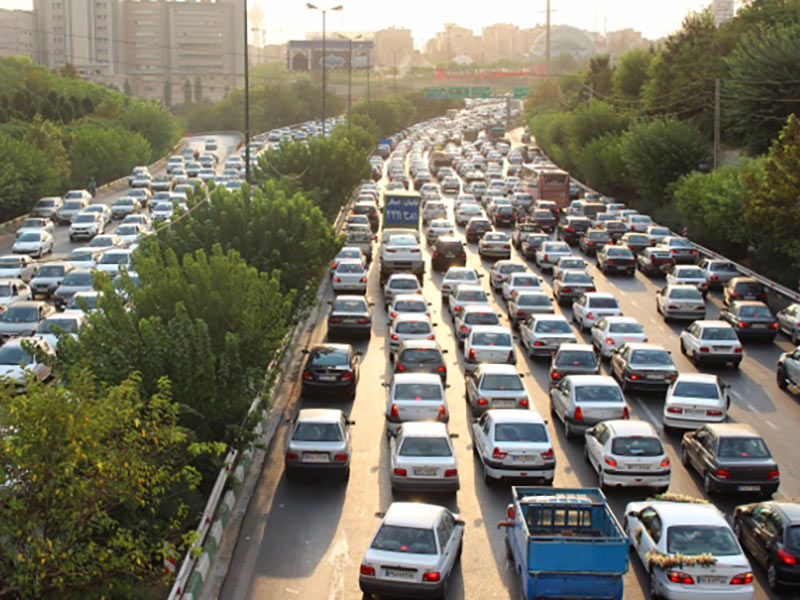 While drivers seem aggressive at first look – once you are crossing an avenue, they indeed do their best to absolutely avoid hurting you!

In Tehran mains streets, included on crossings where in theory traffic lights should regulate it, even the frequent presence of police does not change much; I started to consider this incessant traffic a kind of bloodstream, pulsing in an unstoppable manner – with all possible infractions, cars and motos passing on red, doing crazy u-turns, in apparent absolute ignoring of pedestrian’s need to cross “their territory”. For me, especially awful were motorbikes are coming fast from an unexpected side, where they should simply not be! Aside from driving on walkways, of course! Even worst in evening or night, when some do not bother to put their lights on.
While I had some experience of mildly similar things from Rome, here it was massive! So, what to do? When in the need to cross an important street, waiting for a small break in the flush of vehicles can take eternity…The only solution – while in Tehran, do as Tehranis do, it seems obvious and easy, doesn’t it?
Well, it is very mental. Slowly, most people get used and, strange as it can be, they survive!
They simply enter and walk, meter after meter negotiating, via visual contact with oncoming drivers (and calculating their speed and possible moves) the next steps, with dozens the cars and motos passing around, some accelerating, some slowing down, and sometimes you must run a bit…its always stressing, of course, and a rush of adrenaline happens. In some very large avenues crossing just one lane is a psychological challenge, for unfamiliar ones. To add insult to injury, besides looking really 360 around, pedestrian must-watch down, too – along most of Iran streets there are small rain canals, ready to trap your foot – and in worst of cases, break it!
It took me a couple of weeks of hard stress to adapt more or less to this, and slowly understand and accept some logical findings: this the way it works here; from many, many years. And no hope to change it in any near future. Yes, it is very chaotic and our European minds would love to regulate it severely – but otherwise, Iranians became masters in functioning in exactly this way. In fact, walking for hours on a daily basis I did not see incidents. (Btw most victims of careless driving in Iran find their fate on highways or roads out of the cities). Also, while drivers seem aggressive at first look – once you are crossing an avenue, they indeed do their best to absolutely avoid hurting you – for human compassion, of course, but also for lots of problems that putting someone under-car would cause in Iran, including so-called “blood money”. Hundreds of times I saw Iranians, sometimes lone ladies in chadors, just walking fearlessly inside these rivers of fast coming cars and simply passing unhurt across, as it would be the most natural thing they ever do.
Well, as it takes a while to adapt, what can do a tourist that stays only a few days in Iran? Easiest tip: stick to someone crossing a street, so you will also pass safely. And try to cross streets at official crossings with lights, at least some cars stop there at red – but always watch out for motorbikes! And please, do not be so afraid – even if it looks so crazy, the Iranian city traffic is indeed quite safe 