In north west of Iran the history of old Persia is in the traditional architecture, ancient inscriptions on Alvand Mountain, and Kandovan’s hand carved houses in the mountains that have been inhabited for 700 years now. On this region of Iran you can try the world’s finest caviar from the world’s biggest lake, Caspian Sea. You will reach the northern area of the country via Chaloos Road one of the top 20 most beautiful roads in the world. On the Caspian shores on the foot of Alborz range sits the beautiful historical village of Masouleh.

You will see the second oldest church in the world in West Azerbaijan province of Iran. Monastery of Saint Thaddeus or Qare Kelisā also known as Black Church is one of Iran’s world heritage. Another world heritage of Iran that you will visit in this tour is in the capital, Tehran, the Golestan Palace from the Qajar era. Mausoleum of Baba Tahir, one of the respectable early poets in Persian literature, and the mausoleum of Sheikh Safi-al Din that has been built by the most beautiful Iranian traditional architecture are among other attractions of this tour. 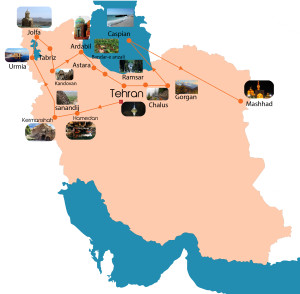