As a part of our newly started project to evaluate the hotels, we visited Espinas Palace hotel, one of the most luxurious hotels in Tehran and Iran. Our visit started with a delicious breakfast at the Laton restaurant and a quick tour of the rooms and suites of the hotel.

Espinas Palace Hotel on North West of Tehran right on the foot of central Alborz Mountains opened in 2016. Espinas Palace is a five star luxury hotel with 400 rooms and suites, eight conference rooms, one coffee shop, two restaurants, and the biggest amphitheater in the country (still under construction). The structure has 21 levels above the ground and the 21st level is not finished yet. The hotel has five levels of indoor parking with the capacity of 500 cars and one thousand parking spots outside the hotel. 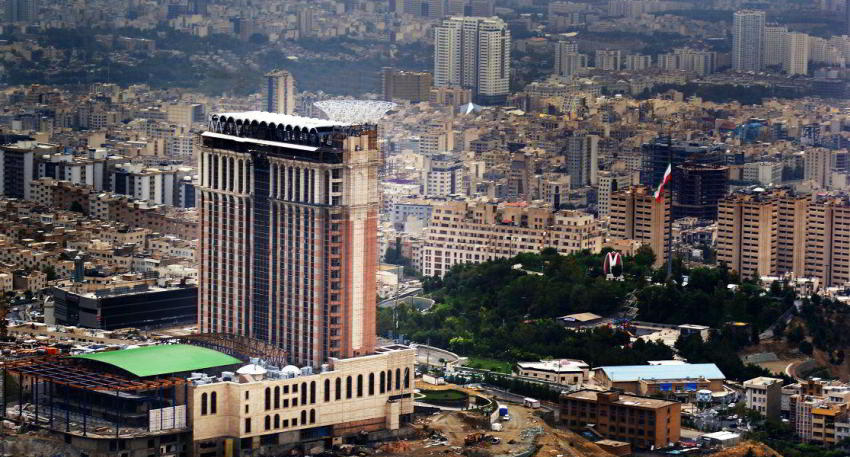 Mr. Sanii-Pour, the resident manager at Espinas Palace, showed us the standard rooms, royal suites, and the Espinas Palace suite. Our first visit was a royal suite. The hotel has seven Royal Suites and all of them are on the 17th floor which gives you a gorgeous panoramic view of Tehran. All Royal suites have the same area but they vary in interior design with slightly different colors and furniture. Next visit was the standard rooms on the 20th floor. The rooms are spacious, with great quality materials and furniture all imported to the country. Even the towels come from France to assure that all services and facilities in the Espinas Palace meet the world class standards.

We are not going deep on evaluating the interior design and colors since it is more of a personal taste and Espinas Palace rooms’ design were not close to ours because we saw no theme or color from the beautiful traditional Iranian culture or art. Mr. Sanii-Pour told us that in the president suites there is antique handmade furniture from 250 years ago, which are the only Iranian material used in the entire hotel. 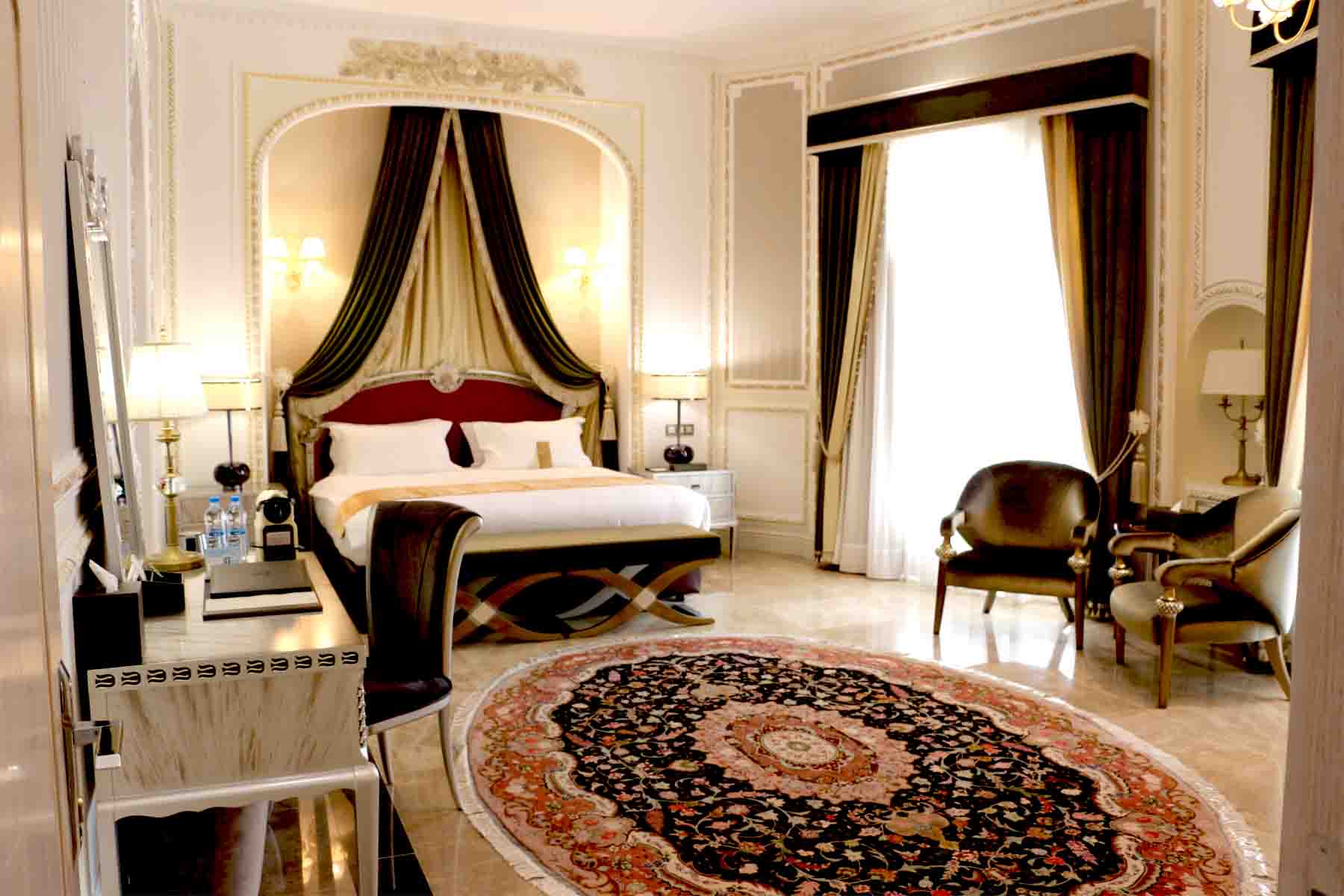 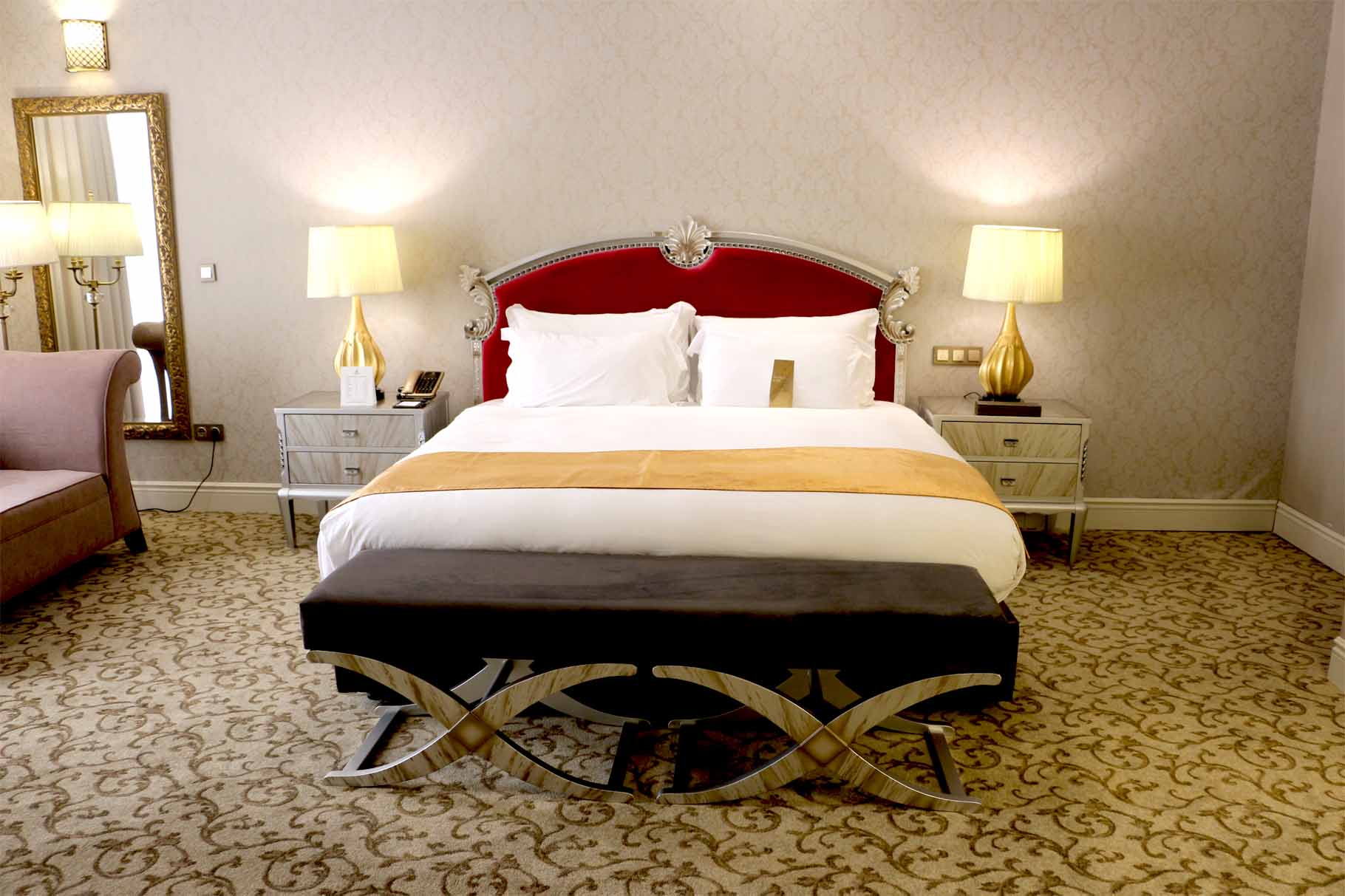 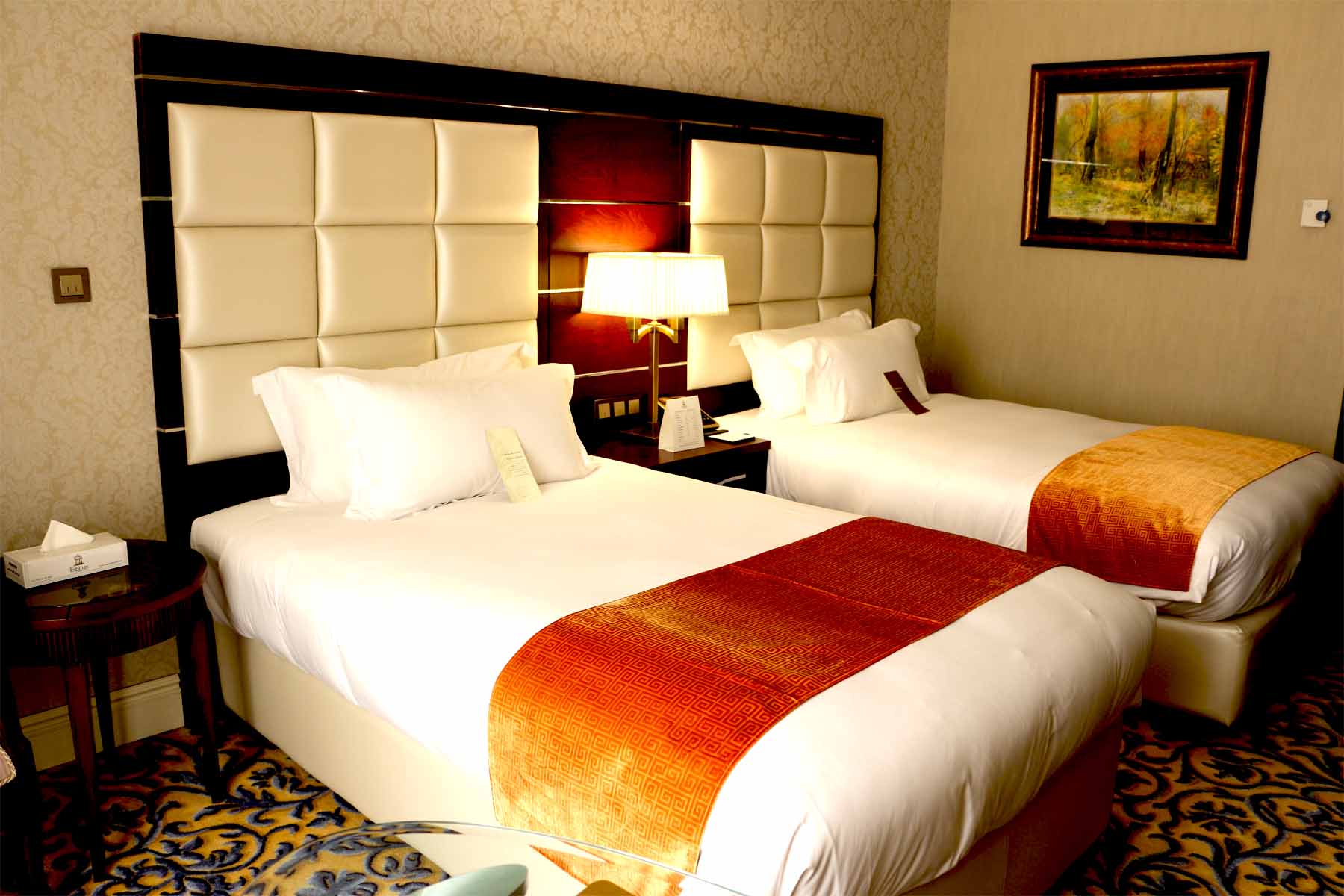 After visiting the rooms we went down to the third floor to see the conference halls and only one of them were available. Women’s World Chess Championship 2017 was going on in one of the halls plus a couple of other conferences. The conference halls at Espinas Palace offer a wide range of amenities especially if you need room for large banquets, trade show or exhibit areas with the highest standards of quality and extraordinary services. The wedding ceremony is one of their specialties as well. 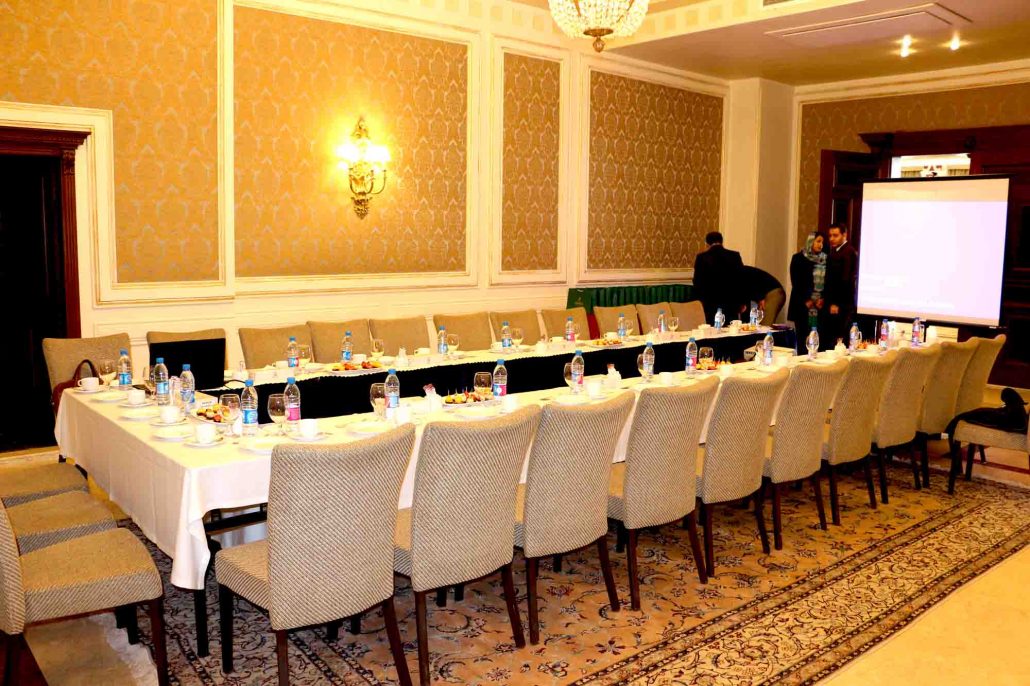 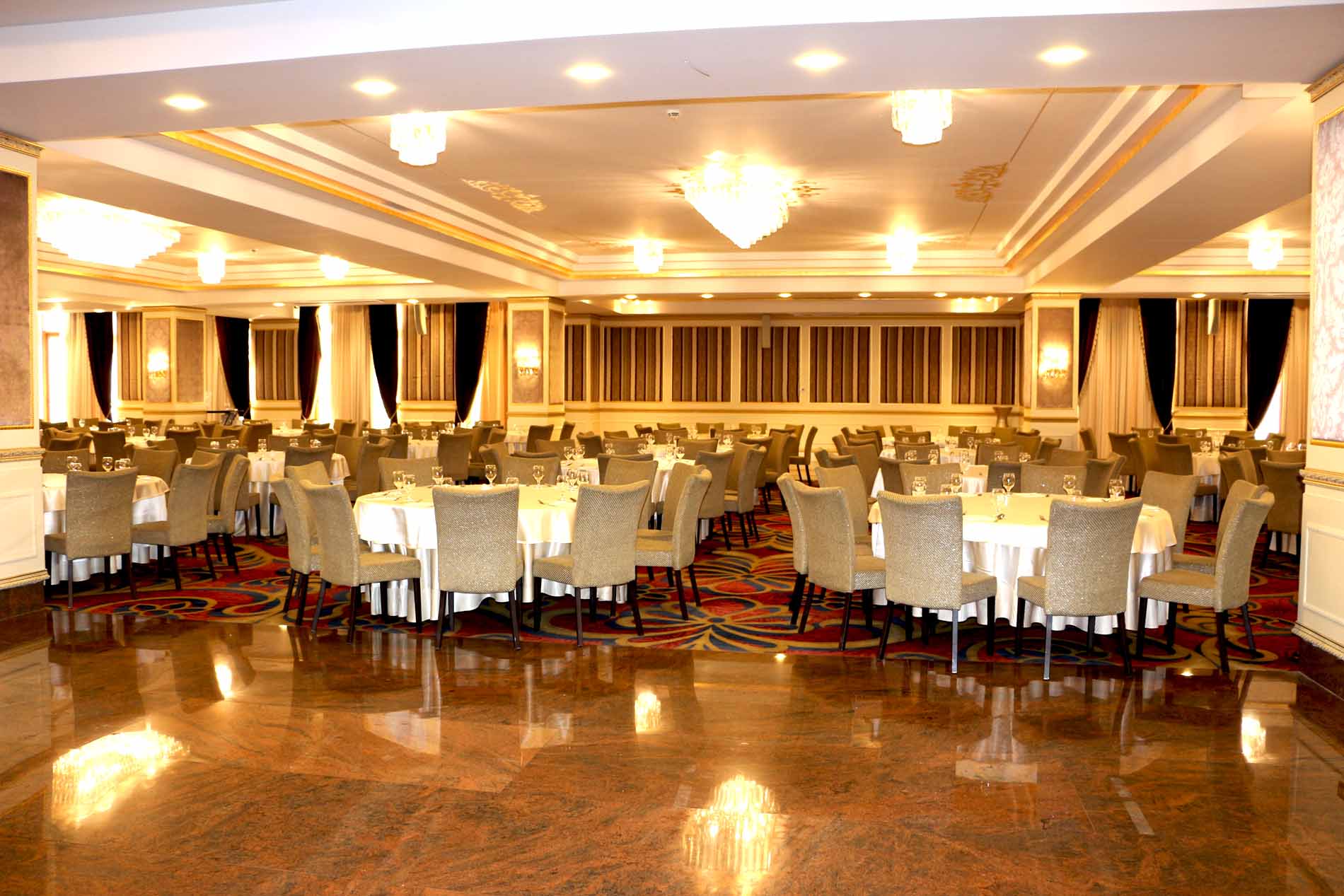 Espinas Palace is one of the most luxurious hotels in Iran and it has hosted international presidents, prime ministers, ministers, and so many primary figures from around the world.

We were impressed by spacious rooms, lobby, conference halls, and the loveliest part is the location of the hotel that is sitting on the highest point of Tehran with beautiful mountains behind the structure and the city crawling to the horizon in front of the hotel. And no matter whether you are staying on the mountain or on the city side, you will enjoy the view. 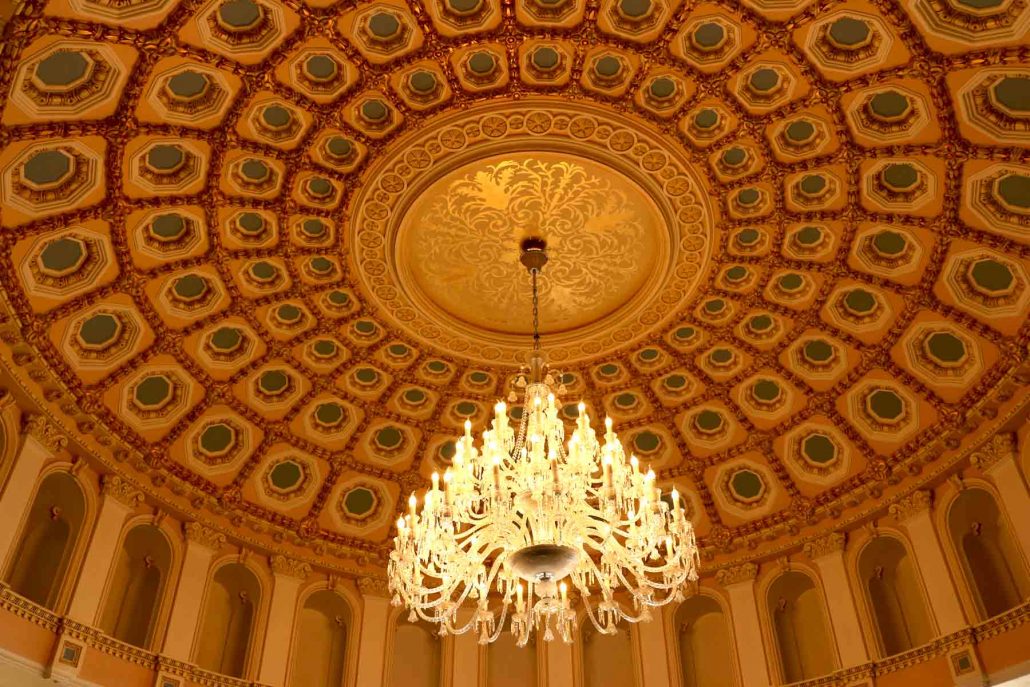 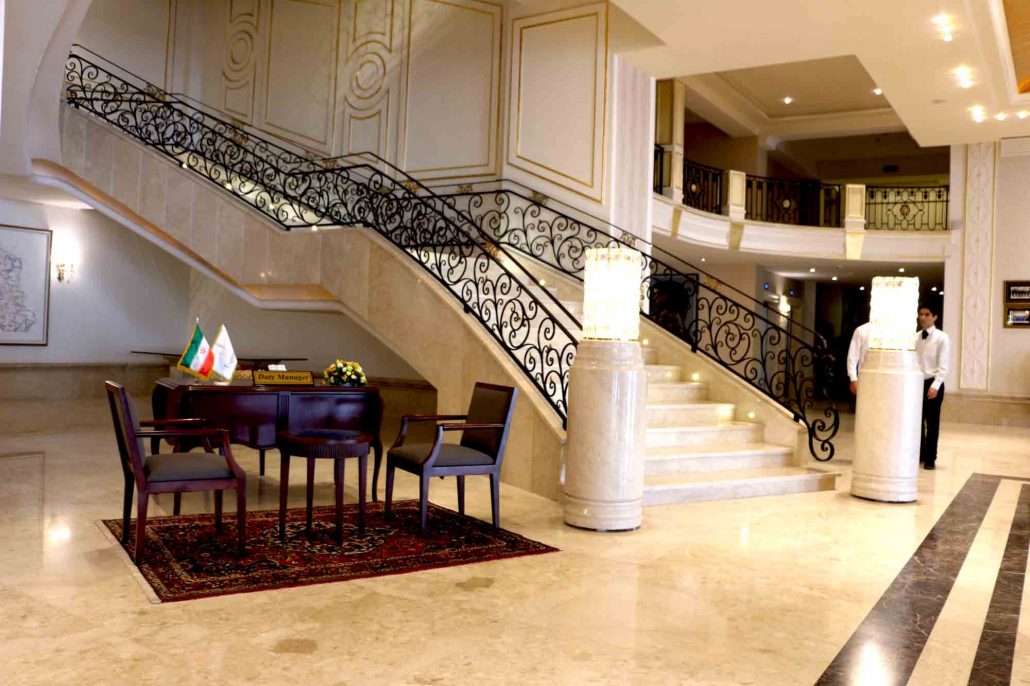 The hotel is away from tourist attractions such as Tehran Grand Bazaar and Golestan Palace, but it is located near to Tehran Permanent exhibition grounds. So if you are not staying in the capital for a long time and would like to see central parts of the city then we would recommend International Espinas Hotel, on Keshavarz Blvd. Espinas hotels are chain hotels with two of them in Tehran and the other one in Astara, Ghilan province.

Many Trip advisor users said when they were staying in hotel the construction was not completed yet and they could hear the noise from work under the process. On the online reviews we saw complains about the slow process of check in and check outs and slow Wi-Fi as well.

The construction is finished now, only the amphitheater is still incomplete but it is behind the building and guests cannot see it. Our other concern was the lobby furniture. There was no furniture in the lobby so we had no place to sit down while we were waiting for the rest of our group, which was pretty long.

Also, the elevators were not sufficient for guests in the hotel. Even though there were five elevators but they weren’t enough for the amount of people using them. There was a long wait every time we wanted to change levels. Finally, when we got into a cabin we stopped on every single floor from level 20 to level three and everybody in the cabin was frustrated.

The other weakness we noticed about Espinas Palace Hotel is their website. The website doesn’t have a good description about the rooms, event halls, or hotel services. This can be a real issue for a hotel that receives so many international guests and many of them want to know detailed information about the place they are choosing for their stay in Iran. But we are aware that all these issues are because the hotel is brand new and all will be resolved very soon.

With the growth in number of tourists traveling to Iran, our hotels are increasing too. Building new and grand hotels like Espinas Palace is a great progress toward improving Iran’s tourism infrastructure that is good news for us and for our dear guests.