Residence in Tehran dates back to 7,000 years ago

You are here: Home / Iran news / Residence in Tehran dates back to 7,000 years ago

Finding the skeleton of a woman, dating back to about 7,000 years ago, in Tehran has provided proof for a conjecture that people used to live where it is currently known as the capital Tehran.

The skeleton, which is called by media the oldest resident of Tehran, was found in a construction site for the city’s water and wastewater system located around Tehran’s Grand Bazaar in Molavi Street in one of the southern neighborhoods of the capital.

Tehran City Council Chairman Ahmad Masjed-Jamei visited the historical site and called for the preservation of the site, noting that necessary measures should be done to turn the site to a tourist attraction of the city.

The archeological team in charge of the excavations of the site stated that according to initial studies the skeleton is estimated to belong to the 5th millennium B.C.

Previously, the oldest archaeological findings ever retrieved in Tehran belonged to city’s Qeytarieh hills, which dated back to about 3,000 years ago.

According to the reports, the new skeleton is expected to be put on display in Iran’s national museum after the forensic tests are completed. 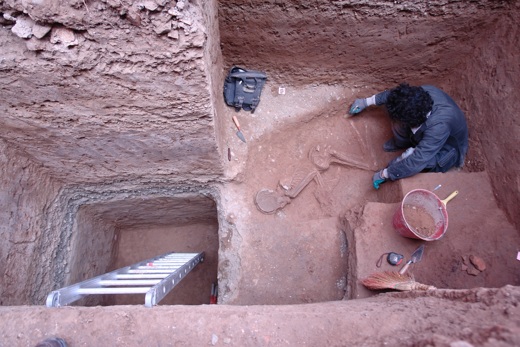 Under the blue domes